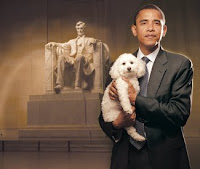 Throughout the raging coverage of the American election, the Obama family had said that win or lose, they would be opening their home to a canine pal once a stable base had been re-established. With even the kids on the campaign trail, it wasn't suitable to become dog owners before the polls closed. Now attention is turned to which puppy.

The AP picked up on the story again today with this note in one reports: "I love you both so much, and you have earned the new puppy that's coming with us to the White House," Obama told Malia, 10, and Sasha, 7, during his victory speech.

Even before the election, pet websites across America were speculating on the nature (breeder or rescue?) and breed of the pup in question. All I can add to that is please, Mr. President-Elect, set a good example to the nation and get your pooch from one of the many excellent rescue centres in the US. It would be even better if you can ensure you're going to a no-kill shelter, so that the message that no dog need be at risk of destruction for want of a loving home can be upheld by the soon-to-be most powerful man on the planet.

Update! Our friend on Twitter, @HappyHealthyPup told us that Michelle Obama, soon to be First Lady, has confirmed that the family will "adopt a rescue dog". Fantastic news!

That is so awesome! I am so proud of our new POTUS for this decision to adopt a dog from a shelter.