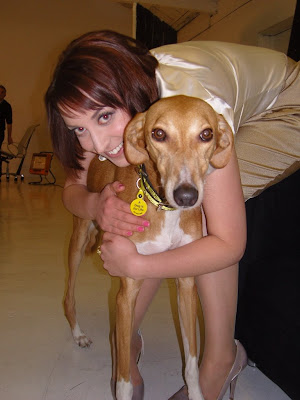 So, I thought she should tell us about it in her own words:

I’ve been working in the Dogs Trust press office for just over a year now and without wanting to sound like a creep it really is great. We meet the occasional celebrity but yesterday I felt like a (minor) celeb myself when I took part in a photo shoot for Cosmopolitan magazine…

Before coming to Dogs Trust I was at an internet marketing company doing a job that didn’t inspire me. Somewhat riskily, I resigned without another job to go to but was incredibly lucky to find myself here, doing exactly the job I wanted, precisely one month later. I heard that a Cosmo journalist was looking for examples of people changing their career in 4 weeks, so I sent her a few lines about my story and hey presto I was chosen!

I thought that would be that, but a few days later she contacted me again – they wanted a photo shoot...

Off I went to a photo studio in south west London with a lovely three legged Lurcher called Elvis and his lovely two legged owner Elvira, our Head of Campaigns. I’d never taken part in a photo shoot like this before but a freezing, white-walled attic room wasn’t quite what I expected! I had my hair and make up done (big hair, v smoky eyes) and was given some particularly shiny office wear and huge jewellery to put on.

Now, my photo repartee is generally limited to:

and I wasn’t convinced that would cut the mustard with the glam girls at Cosmo. Turns out I was right!

All the shots were taken from above – the photographer was basically perched on a tall shelf like a little snap-happy Borrower. In the first shots I had to lie back in an office chair, feet on desk, Elvis by my side. This was apparently to reflect my job – if only! The pose was easier said than done as I had to be careful not to move my carefully sculpted hair and both Elvis and I had to be looking up at the photographer at the same time. Cue lots of treats, chirruping and rustling noises from the photographer to get his attention!

Then they handed me a lovely grey cashmere dress to wear and they took shots of me lounging on a sofa, Elvis curled up next to me. I have to admit that wasn’t too tricky a pose…

In all it took about 3 hours. Elvis was a little star and incredibly friendly, hopping about on his three legs from stylist to photographer and back with a big grin on his face the whole time. If you want to see the results the article is due in the February edition, out in January. I had a great time and would do it again but I’m definitely going to stick to my day job!
Posted by Dogs Trust at 15:58