Guest Blog: Golden Oldies and the benefits of adopting an older dog 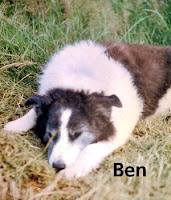 I mentioned on Twitter that we're always keen on new voices and guest blogs around here... in the blink of an eye Georgina was asking to write about older dogs. A topic close to Dogs Trust's heart, so here are the wise words of a supporter who knows how rewarding adopting a golden oldie can be for both sides of the partnership:

Please consider adopting older dogs, as they are often overlooked in favour of the ‘cute’ youngsters. I have had two elderly dogs from Roden, who could not have been more different in temperament, but who both rewarded my family with brilliant company in the time they spent with us.

Don’t worry that an older dog is going to cost a lot in vet’s bills. Dogs Trust has a very generous scheme for ‘geriatrics’ and, apart from worming, flea-treatment and inoculations, Dogs Trust pays for veterinary care, as old dogs are fostered rather than adopted (in day to day living, there is no difference).

Something a lot of people ask is, “Don’t you get upset when they die?” The answer is yes, of course, but only because they have brought such pleasure, and so quickly become an important member of the family, not because of the short time we may share with them. The benefits far outweigh the drawbacks.

Let me tell you about my Roden oldies.

Ben was sprawled across his very own sofa and didn’t even look at me when I first saw him. After seven years in Roden (preceded by seven years on a chain), no one had asked about him before. I went to meet him with Steve Goward and Carrie-Anne Goodchild, his devoted carers, and they explained that as a long-termer, Ben had ‘special needs’. He would, after his difficult early years, need a lot of patience and careful handling. Ben played so delightedly in a rough and tumble game with Steve that I could see that underneath an aloof exterior, a very nice dog was hiding!

We visited Ben regularly over several weeks and he came for a visit to our home, before he finally came to live with us. He had behaved badly in the past (yes, he had bitten) and this was made clear to us, but we were also helped to understand his behaviour, and taught to handle him tactfully. The whole process was careful and mutually beneficial. 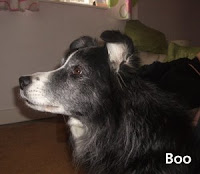 The day he was ours for good is a day that I will always remember as filled with emotion, for us and for the Roden staff. There were tense moments over the first few weeks, but surprisingly quickly, Ben came to be a proper pet. Always clean in the house, never demanding, keen to go for walks, but never too boisterous, and, once his trust developed, great for a light-hearted wrestle! The day he first made a decision for himself (sorry Cesar Milan), after those first fourteen years of limitation, was an utter delight. I had taken him for a walk and called him in. It was a gorgeous sunny day and he hesitated – I asked him if he wanted to stay out for a bit – releasing him with a gesture, and off he went, found a place in the sun and stretched out for a nap. He is buried in that spot now – Ben’s suntrap! He was with us for one and a quarter years, and I can honestly say that they were the most fulfilling off my dog owning years.

Boo was a completely different story. He was only in Roden (where he was known as Stan) for a few months. Although stone deaf, he was the most perfect of dogs, amiable, gentle, intelligent and kind. He would play ‘fetch’ for toddlers and even people who did not like dogs, fell for him. He was with us for three years and never put a foot wrong. Like Ben, he was housetrained, could free run without the worry of livestock chasing, and would happily sleep through the day on the rare occasions we had to leave him alone. The furniture was safe, as were all our shoes! 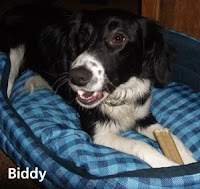 In contrast I now have a young dog: a stray my vet asked me to take, and boy, am I missing my old codgers. Apart from loads of accidents in the house, and Biddy’s need to walk (make that run), for at least an hour and a half a day, she cannot go off the lead yet as her manners are appalling, and she gets us up in the night like a new baby! She uses the furniture for trampolining practise and brings us our own socks and shoes as mangled offerings! Hey Ho! She is a darling and she will settle down, but she will not be more loveable, or loving than the geriatrics!

I cannot recommend too highly getting an older dog from Dogs Trust. They will reward your kindness a thousand fold, and do make for a gentler pace of dog-ownership.

Thanks Georgina! What a great guest blog. Don't forget that you can also help an older dog have a comfy retirement by sponsoring the Oakfield Oldies.
Posted by Dogs Trust at 13:13

That was a lovely blog post. I even got "something in my eye" reading about Ben. ;)

I loved that post about the oldies. My mum adopted an oldie and he's gorgeous. I did, too, a few years ago through a different charity. Sheba was a gentle 13/14 yr old shepherd/collie cross and although she only lived for just under a year I wouldn't have changed having her for anything. So - thank you!

I recently came accross your blog and have been reading along. I thought I would leave my first comment. I dont know what to say except that I have enjoyed reading. Nice blog. I will keep visiting this blog very often.