Book Review: Who Moved My Job? by Mark Kobayashi-Hillary 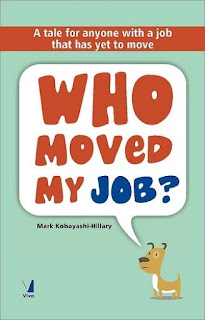 Who Moved My Job? is actually a short story about globalisation and the shifting tides of workers and skills around the world. So, what's it doing on a dog blog?

Well, Mark Kobayashi-Hillary has very cleverly taken the idea of Border Collies working on a farm who are supplanted by foreign sheep-herding breeds and used it as a nifty allegory for the issues surrounding globalisation.

The three sheepdogs - Winston, Charlie and Blair - are initially cut adrift and in danger of becoming, essentially, extinct. At first they're confused, bewildered and very resistant to any form of change such as finding a home from the centre they've been taken too. In steps Matilda - a wise old Staffordshire Bull Terrier based on Kobayashi-Hillary's dog of the same name and breed - to help push them in the direction of applying their farm skills to city life in a new, exciting and fulfilling way.

There are no trick questions or particularly opaque levels of meaning in the story. The idea is simply to prompt Western society to consider how jobs will develop and move around the world as time moves on. In Kobayashi-Hillary's dog world, those who stay fixed on the past and old use of skills will soon find themselves sidelined but those who examine their abilities and find a new use for them might find that they're in a better position than they started in.

Simple? Yes. Simplistic? Not really. This is the opening question, not the full scale analysis because that latter disection of the issues is what the book is pushing towards in the first place.

This thought provoking and engagingly written piece is well worth the time spent perusing it, and leads to a website from which links to discussions, information about the author and gorgeous pictures of the real Matilda can all be found.

Whether your job is yet to move or you've found yourself on the verge of a shift, take a glance and get involved with the issues.
Posted by Dogs Trust at 13:12