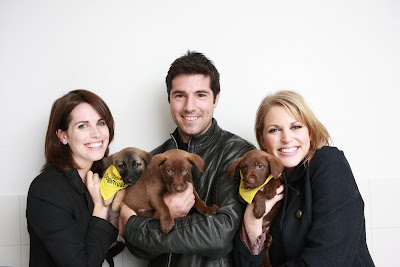 I gave our Communications team about 25 seconds to catch their breath on returning from Dublin before I hounded them for a behind-the-scenes guest post on the goings on at the launch party. Duly the lovely Sinead, who is deputy head of the department, obliged with these snippets on making sure the celebrity guests had a great time. More photos on our Flickr feed!

The photographers, Marc and Tony, at the Dogs Trust official opening seriously had their work cut out for them. Tony was taking pictures of staff and guests while Marc was looking after our VIP guests. Bear in mind that we had FIVE celebrity guests all arriving at the same time. Interesting. Craig Doyle was super lovely and got up close and personal with a fabulous Samoyed called Kiko, who later had to be put back in his kennel (Kiko not Craig) as he was a little bit over excited. Ben, the other dog pictured with the lovely Mr. Doyle got a little bit amorous and let’s just say the pictures will have to be photoshopped…

Meanwhile in the puppy palace I was with the gorgeous Amy Huberman and Holly White doing an extremely glam photoshoot involving three stunning little puppies. The camera was clicking and the girls were working their magic until a certain little wheaten doggy decided to throw up all over Holly’s coat. Emergency wash down of jacket and back to work like a true professional!

A few hundred yards away Steve Collins the ex boxer was meeting his “doggy double”, Marley the Boxer, and It was honestly love at first lick. I mean there were practically fireworks between them and Steve decided there and then that he wanted to rehome Marley.

After a long but wonderful day I can safely say that all of us were exhausted and ready for at least two days sleep which of course never happened as it was straight back to work. I am looking forward to a long lie in this weekend!
Posted by Dogs Trust at 09:28

hey friend
you have reall great blog. i am a daily visitor.
keep it u