Some mental_flossing for the weekend 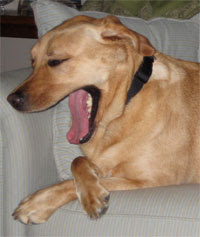 Hello everyone! It's Lo chatting to you here today. Anyone who follows me on Twitter or has to listen to me regularly will know that I am a huge fan of mental_floss, a bi-monthly magazine and blog all about facts and trivia.

Well, today they had an dog-related piece that I thought I'd share with everyone, Man vs. Beast: Is a Dog’s Mouth Really Cleaner Than a Human’s? This article chats about the often discussed matter of dogs having cleaner mouths than humans. Plus, it's Friday... who doesn't want some light-hearted learning on a Friday?

Man vs. Beast: Is a Dog’s Mouth Really Cleaner Than a Human’s? by Matt Soniak

Comparing a dog’s mouth with a human’s mouth is sort of like comparing apples and oranges—really filthy apples and really filthy oranges. Both species’ mouths are hot, damp places teeming with roughly equal populations of bacteria. Neither would be described as clean, and any question of comparative cleanliness is irrelevant because so much of that bacteria is species-specific. Most of the germs in your dog’s mouth aren’t going to be a problem during a a big, wet doggie kiss. You’re more likely to run into trouble kissing another human than you are a dog, because bacteria from a person’s mouth will feel equally at home in yours.

Of course, not all bacteria is species-specific. Dogs and humans can and do transmit some germs to each other via the mouth, so if your dog is the type that likes to lick faces (is there any other type?), there are a few precautions you can take. One, try to keep your dogs from picking up any external bacteria by keeping them out of the trashcan (and away from rancid food), and away from wild animals (lest they contract rabies). Two, keep them healthy: up-to-date vaccines, good external and internal parasite control, regular teeth brushing, etc.

And then, pucker up!

While we’re at it, let’s tackle two more things we’re often told about canines: 1) Dogs lick their wounds and they heal very fast, and 2) Dogs don’t get as many cavities as humans. There are simple explanations for both. Licking the wounds gets rid of dead cells and dirt, just like when we wash our wounds. The immune system takes it from there.

As for cavities, they’re largely caused by the bacteria Streptococcus mutans. These bacteria feed on sugar, which is far more common in a human’s diet than a dog’s. Hence S. mutans prefers to live in our mouths, not Fido’s.

And there you have it! Have a lovely weekend everyone... smooch away!
Posted by Dogs Trust at 11:35

Guess we're puckering up this evening then, going to visit our friends and see their 4 puppy who're all going on to new homes tomorrow. Puppy kisses are always the best.