Pete "the Vet" Wedderburn needs your votes to complete the Tri-City-Athlon for Dogs Trust! 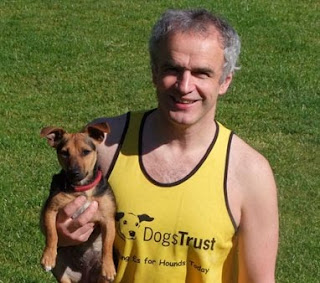 Vet and freelance journalist Pete Wedderburn has long been a friend of ours here, and he wants to seriously show his support by donning Dogs Trust yellow in the Tri-City-Athlon event. However, he needs your vote to do it!

Known as @petethevet to his Twitter followers, Wedderburn is a partner in a busy vet practice as well as a regular contributor to The Daily Telegraph among others, and a dedicated supporter of animal charities.

Our Chief Executive, Clarissa Baldwin, had this to say:

“Pete has been a fantastic ambassador for Dogs Trust over the years and we are thrilled that he is hoping to compete on our behalf once again this year. Dogs Trust receives no government funding so relies on its wonderful supporters to help care for the fabulous dogs at its 18 rehoming centres. We wish Pete all the very best of luck.”

The Tri-City-Athlon is a mutli-venue triathlon event will be held across three major European cities on the same day in the run up to the 2012 Olympics. Triathletes are restricted to those able to swim 1500m in 45 minutes, cycle 40km in 1hr 40 mins and run 10k in 1hr 10 mins.
If you add your vote, Pete could be taking part in the elite race alongside some of the best triathletes on the planet.

The 'add your vote' links arent working! Want to vote but cant :{

They are working, but they're VERY slow (we don't have control over that site, it's not ours) - we too had to wait a good minute before the page loaded up which was quite frustrating!

Thanks for trying anyway! :)

The system has been fixed now, and it's working fine. There's only another day left to vote, and I think I almost have enough. But more needed, to be certain that I get through.... thanks everyone for your support. Pete

Pete sadly wasn't selected for the final 20 but is on the reserve list so they have asked him to keep training.

Obviously it is not uncommon for people to drop out due to injury etc - and although we would not wish that upon anyone :~( , let's just keep paws crossed for Pete that he gets to take part

Nicki and the Cavaliers