It was the Thursday before Easter and the bunny arrived early at Dogs Trust Loughborough. Of course chocolate is toxic to dogs but our staff definitely love it! We had an Easter egg treasure hunt so everyone was divided into teams and off they went following clues to find the eggs containing sweets. There was lots of laughing, running and scratching their heads at the clues. The final clue sent the teams back to reception where the members of the winning team were given a large chocolate egg each. They were all very competitive and the winning team finished in less than 30 minutes! Watch out for next year as its going to be tougher! 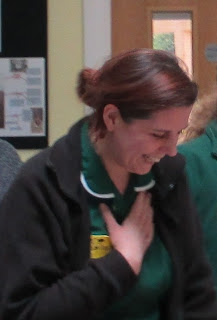 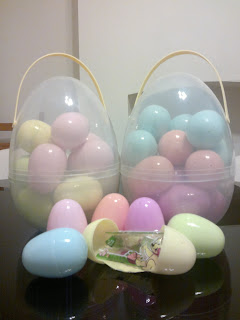 Good Friday was especially good as the cakes arrived! We had a cake stall in reception manned by our volunteers and the staff helped too by buying lots of the homemade cakes on their breaks. There were sponges, crispy cakes, lemon cakes and delicious cupcakes for the humans. Our doggy friends were not left out as they could choose from homemade bone biscuits made with peanut butter, dog chocolate or even some without gluten for those with delicate stomachs. 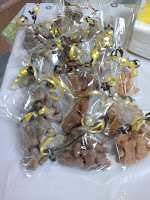 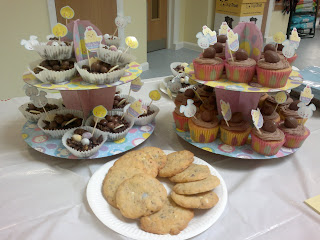 The volunteers also sold raffle tickets to win a hamper filled with chocolate bunnies and lambs, cakes and biscuits which was won by one of our adopters. She was very happy when she won and rushed straight down to collect her prize!

The canine carers were very excited as we had a special visit from one of the puppies who were included in our Opening last June. Redgrave (now called Ozzie) is a beautiful tan lurcher who loves to talk to everyone and bounce around full of fun. It’s a miracle he managed to sit still long enough to get this photograph as at one point he wanted to play with the camera. He socialised in reception talking to children and adults alike and basking in the attention and cuddles. 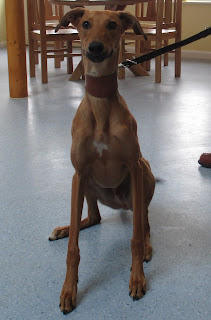 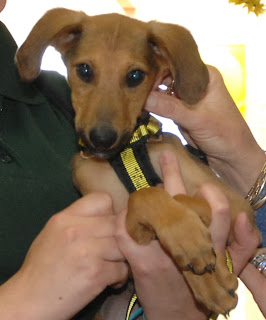 The egg-citement continues with our “Guess How Many” competition where there is a very tempting jar of chocolate eggs in reception and the customer who has the closest guess wins them all. The jar is sealed tightly to prevent any of the eggs ‘sneaking’ away until April 8th when the winner will be revealed. Good luck to everyone who entered. 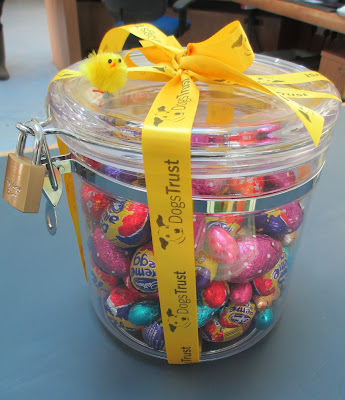 So far we have raised over £325 from the Easter events, a huge thank you to our volunteers for making the cakes, selling them and tempting everyone to enter the competitions!