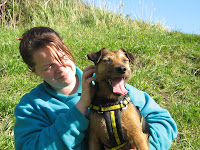 From time to time, our centres report stories that really warm out hearts. Here, Tracey Rae of Shoreham Rehoming Centre tells the story of Chico and the battle to save his eyesight and find him a home...

"Chico is an adorable 6 year old wire coated terrier. He came to Shoreham in May this year as part of a transfer of 10 dogs from South West Scotland. Despite his long journey, Chico was full of beans when he arrived and he continued to woo the staff with his cheeky personality.

"Before he had his vet check we believed that he was quite elderly because he had cataracts in both eyes that were progressing quickly and his eyesight was already severely impaired. We were astonished to discover that he was probably only about 6 years old and it was upsetting for everyone to think that he might lose his sight completely at such a young age.

"Luckily Grove Lodge, the vet practice that we use at the centre, has an eye specialist, Denise, who was convinced that she could help him. We made arrangements for him to be admitted but we knew that his aftercare would be critical. It was essential that he be kept quiet and still so that the surgery could heal properly. If he continued to bounce around his kennel, he could very well bounce his way to blindness.

"So began ‘Operation Chico Time’. Lisa Haynes (pictured left, click to enlarge) the centre’s vet nurse decided to take him home with her for the first couple of days after the op and spent a sleepless weekend as Chico had a very different idea about what constituted keeping still! Her dedication paid off and Chico got through those critical first days with a fighting chance. Lisa then converted an office at the centre into a padded boudoir for Chico and cancelled a holiday so that she could give him his eye drops (which he wasn’t very keen on) and lots of attention (which he was very keen on). Everyone crept around outside the room so that we wouldn’t disturb him and the reception staff came running, primed with hot dogs if they heard him start to bark.

"All the staff and volunteers at Shoreham rallied round to help him recover and a wonderful new home was found for him with a lovely couple who were happy to visit and sit quietly with him during his recovery. Finally 2 weeks after his operation, he had a check up and was pronounced ‘sighted’ once more! Shoreham was a very happy place even though he was still on strict bedrest.

"Denise, the vet who treated him has now nominated Chico for the Grove Lodge ‘Braveheart’ award which is given to dogs who have undergone extensive and complicated surgery. So fingers crossed, he will be ‘Chico the Brave’ by the time he goes to his new home."