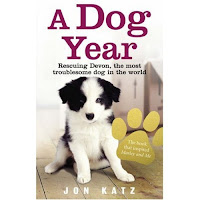 As part of the Ebury Book Club which has begun on DoggySnaps, I was sent a copy each of some of the books that will be offered to our members to review. Here's what I think...

A Dog Year is a book aimed to appeal to anyone who's ever had an intractable pet. Despite the fact that I grew up with cats the marked difference between Jon Katz's docile, well-mannered and lovable Labrador Retrievers and the new, unexpected arrival into the family - troubled two-year-old Border Collie Devon - certainly struck a chord with me as I try to integrate a defensive, semi-feral kitten into my household after ludicrously straightforward experiences with two of the gentlest cats that ever lived.

Katz's autobiography is part-comedy, part-drama, with a hint of pet care manual thrown in. Although Devon is clearly an exceptional case, he bears many of the typical hallmarks of his breed: fierce intelligence, strong attachment to his pack leader, boundless energy and a physical need to be gainfully occupied every waking minute. That this is, in Devon's case, mixed with a severe lack of confidence and chronic separation anxiety is the crux of this alternately heartwarming and heartbreaking book.

I do feel I need to add a warning here, however. While Jon Katz is merely reporting on his own experiences and talks about all he has to learn about training, it is important to remind potential dog - and Border Collie -owners that his methods are not to be followed blindly without research. It's important to see this as a learning curve for both Devon and Katz; not only because I work for Dogs Trust but because I simply don't believe in punishment-based training, I would focus on positive reinforcement from the outset. Katz came to it late, having achieved some success with aversive methods that ultimately didn't really solve the underlying problems but made Devon easier to communicate with. The dominant behaviour strategy is a hot potato in dog training circles, and I'll be interested to see what comes out of the discussion on DoggySnaps (come join us!).

In particular, what makes A Dog Year stand out from similar books of its type is the writing style. Katz's prose is journalistic, swapping tenses and focus to string together a series of vignettes with the different dogs in his life at the centre. It reads far more like a novelised diary than a literary autobiography; in fact, it reads almost like a blog stitched into a book. Perhaps it's for that reason that it's a quick read; before you know it, you're almost finished.

Katz is particularly adept at pulling the emotional heartstrings, and it's clear he deeply loves every dog that's passed through his home. Do I agree with his methods and some of his choices? No. But I cannot fault his writing or his honesty when he owns up to the mistakes he's made, and I find it important to read things that challenge my opinion and open my mind to other possibilities - even if I find out in the end that my mind hasn't been changed. As far as I can tell, Katz is not trying to revolutionise training, however; he's just telling a story.
Posted by Dogs Trust at 10:47

Two Paws Up! We are 2 Maltese dogs and we loved this post. Love, your PaLs, LuLu and LoLLy! http://www.luluandlolly.com