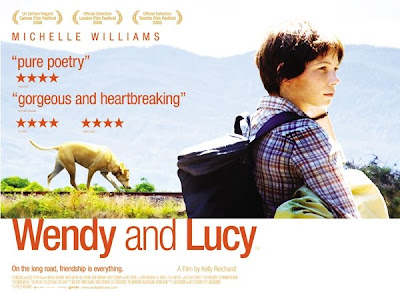 Last night, the lovely folk at Soda Pictures held a special preview screening for the brand new film Wendy and Lucy, which is released to the general public on the 6th of March this year.

Not content with making a film featuring a Palm Dog-winning pooch, they decided they'd like to help dogs during their night at the movies. The guests dug deep and generously provided enough funds to sponsor a dog for a year. They were to vote on their chosen Dogs Trust dog but there's a tie, so we'll let you know which dog when they've decided on a tiebreaker!

So what about the movie? Well, here's the synopsis:

Wendy Carole (Michelle Williams) is driving to Ketchikan, Alaska in hopes of a summer of lucrative work at the Northwestern Fish cannery, and the start of a new life with her dog, Lucy. When her car breaks down in Oregon, however, the thin fabric of her financial situation comes apart, and she confronts a series of increasingly dire economic decisions, with far-ranging repercussions for herself and Lucy. Wendy and Lucy addresses issues of sympathy and generosity at the edges of American life, revealing the limits and depths of people's duty to each other in tough times.

Were you one of the lucky people who got an advanced screening? Are you planning to see the film? Tell us your thoughts.

Many thanks to Soda Pictures for their support!
Posted by Dogs Trust at 13:44