When I heard on the news today that the BBC plans to auction a goodly collection of Doctor Who props later this month, it reminded me that the BBC is not the only place you can find a little extraterrestrial technology... 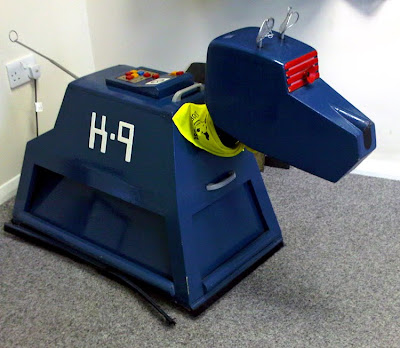 K-9 found his way to Dogs Trust some years ago via a rather meandering route - though apparently no TARDIS was involved. He had been originally sold at a BBC auction and allegedly found his way to Crinkley Bottom before ending up in a Doctor Who exhibition at Watermouth Castle in Ilfracombe.

At the end of the exhibition, the owners of the Devon attraction gave the famous 'tin dog' to Dogs Trust Ilfracombe, as thanks for the help one of the Training and Behaviour Advisors had offered to them with their dog.

After a few years as star attraction at the centre, K-9 has now opted for a peaceful retirement (we never did get the electronics to work properly!) at Dogs Trust's head office in London. He'll be staying with his loving forever owners for good.
Posted by Dogs Trust at 15:58

That's just awesome. My husband and I love Dog's Trust (proud sponsors of four dogs) and love Doctor Who, so this post made us very happy!