Barking in the Big Apple: Part two of Natalie's trip to New York 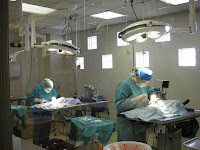 Part two of Natalie Dexter's experiences in the Big Apple, after accompanying her partner on a business trip became a chance to find out more about New York animal welfare... (read Part One)

The day of my final ‘experience’ arrived and truthfully, I was a little nervous about this one. Jenny had mentioned something about getting a taxi to A, C & C (Animal Care & Control, NY). What did this mean? What would I see, who would I meet, luckily one of their volunteers, Michael (a Wall Street banker) let me shadow him for the afternoon. After meeting Michael, he put me at ease straight away. Phew!

Now I don’t want to paint a dark picture of this place but initially I did feel a little out of sync. There were a lot of people and dogs but as the hours passed, and my judgements began to fade away, I felt a strange feeling begin to occur. Michael and I had approached a couple with a 10-year-old dog. They had arrived in hope that an operation could be arranged for their dog, Chupacabra, who had bad mammary gland tumour. The Pets for Life programme helps people in need offering advice and help in order to prevent people having to ‘surrender’ their pets. Most of these pets don’t have a second chance at life. After an emotional rollercoaster the couple came to conclusion that they wanted help in finding a vet who could perform a low cost operation.

Money was a issue but on my way home with Michael, he asked ‘what would you do?’ It’s funny, I’d never ever been in a situation like this before. What would I do? Trust that the couple would actually bring the money to the vet, however small the amount was or…yes, that was the feeling I had been experiencing. Selflessness. Michael agreed with me. He would pay for the remaining vet costs, without the couple knowing, all because he wanted to save Chupacabre’s life.

Next month I will have been working at Dogs Trust for four years. My experiences in New York have showed me the good times and sadly the bad times, in which dog owners have to make decisions surrounding the future of their pet dog. I’d like to believe that being a part Dogs Trust I have in some small way helped young people think about the responsibilities in owning a dog because you know, a dog is for life, not just for Christmas.
Posted by Dogs Trust at 15:15

Great to hear your stories Dex, Dogs Trust is lucky to have you! :-)