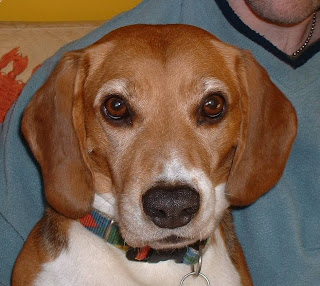 Beagle reunion update: Good news, we’ve had nine ex Consort labs Beagle owners get in touch since this blog was posted last week, almost enough for a beagley knees up. Keep them coming!

Do you own a former laboratory Beagle? We’re searching for any surviving Beagles who had been rehomed via Dogs Trust (then NCDL) following the closure of Consort Kennels near the Forest of Dean in 1997. (Article)

Dogs Trust took in over 50 of the traumatised dogs, who were destined for a testing laboratory, while a further 100 Beagles were rehomed via other rescue organisations – thanks to the generosity of the late Linda McCartney, who provided financial assistance.

Now, proud Beagle owner and Dogs Trust supporter Mark Eavers is on the look out for any remaining Consort Beagle “brothers and sisters” who may wish to join his boy, Grommit, in a small reunion.

The reunion was originally mooted in our supporter magazine, Wag, in July and already a handful of owners have contacted us, eager for a beagley get- together. If you or anyone you know owns a former Consort dog then please do contact us at wag@dogstrust.org.uk or call 020 7837 0006.