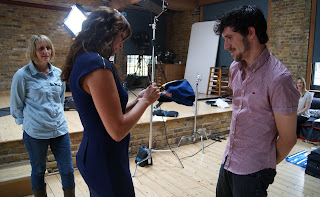 Nico, one of our Canine Carers at Canterbury, has been lucky to combine two of his passions - dogs and photography, in a new series for FIVE TV called 'How to Take Stunning Pictures'. We asked Nico to describe his experience of photography dogs and meeting his crush, the rather lovely Suzi Perry......

Working in dog kennels kinda keeps you at an even keel with reality, so when the Dogs Trust Press team called me about my name being put forward for a TV programme, I instinctively entertained the conversation then shrugged it off. After a call back requiring a photo of myself and that I may be called in to London for a screen test, I got that “good luck in the deep end feeling” (hmm, thanks Press Team!)

I figured my name had been put forward because I do have a keen interest in photography. Novice as it is, I enjoy it because it more often than not involves an important part of my life - dogs!

After the 2:30pm conversation, a 5:30pm phone call came up with plenty more questions and the invitation to come to London for the screen test. I was most definitely ‘bricking it’ shall we say - me, with a camera and lots of people I don’t know, is something my family would definitely laugh at!

A week or so later I found out I had been chosen for the programme. It was explained that in the coming weeks I would be taking a trip to Cotswolds Farm Park (work eh?), then spending some time at the Dogs Trust Harefield rehoming centre and ending it all with a couple of sessions at a studio in London.

On the filming days at Cotswolds Farm Park and Harefield I still could not get used to being relaxed with a big camera imposing itself on me and also repeating what you have said many times, but with the same excitement as the first time. However, the days themselves were great and rolling around with pigs, cows and goats made for my ideal day out. Harefield felt a bit more like home turf, so I felt a lot more at ease. The dogs I spent time with were great and the staff were really cooperative.

The final day of filming was all about the presenter links for the programme. For me, it was ALL about Suzi Perry – I have a bit of a childhood to (relative) adulthood crush. I was supremely wriggly when asking for a photo and signature, but it was the best 20 minutes I could have spent in London!

I am hoping the programme helps to raise awareness of the work of Dogs Trust and the rescue field. It also shows the enjoyment a person can get out of the job that I do. I’m obviously nervous about seeing how I have come across on TV and others seeing what I am like, but the less I think about that the better!

You can see Nico showing off his photography skills on the Tuesday 12th October episode of 'How to Take Stunning Pictures' at 7.30pm on FIVE.

Email ThisBlogThis!Share to TwitterShare to FacebookShare to Pinterest
Labels: "How to take stunning pictures", a man and his dogs, animal photography, channel five, charity events

Really looking forward to watching this :-)

Nico was the brilliant guy who found us our lovely whippet x from Dog's Trust, he certainly stands out as a caring & dedicated member of staff, I'll make sure we tune in & watch

Hi Windy, got my Thursday's and Tuesday's a bit mixed up! The date is definitely TUESDAY 12th October at 7.30pm on FIVE. Thanks for pointing it out :)