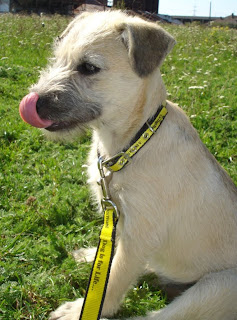 Helen, a volunteer at our Merseyside centre, has kept a diary of her experiences over the past year. Helen and her husband, John decided to get involved with the centre after the passing of their dog in September 2009.

Here, Helen shares her thoughts of the first few months with the centre.

A most terrible thing happened at the end of September 2009. Some people say, “I’ll never have another dog, I don’t want to go through that heartache again”, and others pick themselves back up again and find a new friend. John and I were sort of in between; we both knew that we would love to have another dog, but with certain commitments over the next 12 months, it was not fair to adopt from Dogs Trust straight away. So we took a trip to our local centre and completed a volunteer application form.

Not knowing anything about being a volunteer we knew that we would have to ask about what sort of commitment we would be required to give. We were delighted to hear that the voluntary work was whenever we could make it. We didn’t have to let anyone know when we would be available, which suited us down to the ground.

We went along to the induction on Sunday 20th December 2009. The weather was terrible, it was cold and icy. We arrived at the centre just before 11am and joined the other newly recruited volunteers in the reception area awaiting the induction.

Clare, the Volunteer Co-ordinator, collected us from the reception and took all 10 of us up to the staff tearoom. She was so enthusiastic that the hour induction flew past and before we knew it we were walking around the blocks and becoming acquainted with the centre.

John and I had gone prepared in our walking clothes and raincoats so whatever the weather we decided to walk a little, even though Clare had given us full permission not to stay in this weather. I think we were both quite apprehensive as this was so different than walking your own dog. Clare jumped straight in and gave us Roxy and Billy, two Pomeranians. They were so sweet and loved being together. What a lovely feeling I got from giving them the opportunity to wander around the centre. We took them back and collected Rupert and Badger, eight year old JRT cross brothers. We weren’t sure which one was which, but they were quite funny! The weather got worse and started to snow so after walking for half an hour , we signed out and went home.

The next visit was on Saturday 2nd January 2010 – we decided that this would be our year for voluntary work. We decided to see how we could manage and wow many hours can we clock up by the end of the year. Now there was a challenge!

We arrived at 9.15 am and sort of made a beeline for Badger and Rupert in block 4, but we were intercepted on the way by block 2. We took Jackson (a seven month old collie) and Bobby (a 12 month old cross breed). Both had homes, which was great news. Then we went out on our own with John taking Jimmy a terrier who was very nervous and I had Elsa (a resident staffie). John had done two laps before I’d even done one!

Next up John was with Sirus (a lurcher) and I had Lex (a three year old cross breed). After two laps we then went back to collect Rupert and Badger before the staff went for their break. We did a couple of laps and then sat in the summer house, as the rain got heavier. We put the boys on the seat and they took turns in sitting on our knees, this was a lovely moment and I’m not sure who was enjoying it the most! We did another turn around the centre and I managed to slip on some ice. Rupert looked at me as if to say, ‘what are you doing down there?’. This really made me chuckle!

‘Gosh, how great is this making me feel? I feel so invigorated I can’t wait to go back tomorrow’, I thought. It was also brilliant that John was there with me; it’s something that we can do together, but still have our own space. What a perfect pastime. Even though the volunteering was no replacement for Dylan, it was certainly helping us come to terms with our loss.

It’s early March and the weather isn’t much warmer, but we are starting to be recognised by the staff at the centre and by other volunteers. On our first few visits to the centre I was almost attempting to see how many dogs I could take out and help to give a little stretch of their legs, but now I’m finding myself giving a longer walk and more quality time to each one. It also means the staff aren’t constantly handling the dogs in and out of the kennels. It seems to work well by doing a couple of laps of the grounds to achieve that initial stretch, followed by lots of cuddles and sometimes kisses! Of course not all dogs want that sort of intimacy, but just to sit and watch the world go by is good enough.

I ventured out with Finn, a 4 year old trailhound. Finn is so handsome and has such a loving nature, but seemed quite nervous. We did a lap and I kept talking to allow him to get used to me. We then stopped in the middle of the grounds and just watched while I gently talked and stroked him. Finn started to relax a little and I gave him a few treats. We then had lots of big loves and fusses, and after another few laps we sat at the bench for more loves and treats. On the way back to his kennel Finn was so much more relaxed, I felt so satisfied that I had been able to give a little calm to him; it is such a wonderful feeling.

It’s very strange as I have mainly had Collies at home, but volunteering at the centre has opened my eyes to many other types of breeds. Who knows what our next canine companion will be?

I’ve asked my manager at work if my department will accommodate a change from my 9 - 5 job for 12 months to allow me an afternoon each week at the Dogs Trust. I’m so excited about this change as it will certainly help towards obtaining voluntary hours and commences in April 2010. It’s not always possible to volunteer at weekends so this way I can visit the centre at least once a week.

It’s Easter and the weather still isn’t that much better, but on Sunday and Monday, John and I spent a few hours each morning at the centre. This was quite exciting as we asked if we take the dogs off the grounds to the little park. The dogs really enjoyed themselves; different scenery, smells and longer walks. It was also the first time that we walked Snoop and Bryn (a mum and son) together; little did we know what was to follow.

April 11th, our first volunteer walk – the planned Formby Walk ended up being ‘the dream’ due to the weather. We congregated at 10am and Clare led the way. We took Snoop and Bryn. This was all very ironic as ‘the dream’ was quite poignant, this was the walk we tried to do with Dylan but never got the opportunity. So after a deep breath off we went with Snoop and Bryn. Halfway up the hill, we stopped for a fuss and waited for the others to catch up, Snoop, despite being 13, was definitely a front runner. As I gave Bryn a good fuss, I realised that he didn’t have his usual harness on, but this one had the name tag ‘Dylan’. John and I both looked at each other and smiled. Was this fate?

The following weekend after walking Snoop and Bryn, John and I talked about our expressing our interest in rehoming the pair. However, we had a camping week to look forward to in May and our holiday at the beginning of June. It wasn’t quite the right time, but we were prepared to wait.

Come back tomorrow to read Helen's summer entry, including helping out at the popular Summer Fun Day!

What a lovely diary, I will tune in for the next instalment, if more people could read this, there would possibly be more volunteers, I felt a lump come to my throat when you read 'Dylan's' name tag.

welldone you two! you are valued volentiers and we all say a big thankyou to you both and all the other volls who enable dogstrust to do a great job.. what a wonderfull idea to put your diary on facebook the best thing i have read here in a long while.perhaps dogstrust could look at this as an idea for a book to follow the poppys books.
caroline dogstrust merseysidexxx
(often found in reception)

Great to read your diary! The staff and volunteers at Huyton Dogs Trust are wonderful! I think our little Lex might have got a mention in this entry, we adopted him in January 2010, he says hello!: