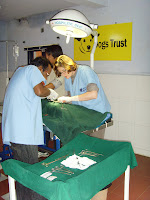 Who needs Captain’s Log when you can have Director’s Blog?
Paula Boyden, Dogs Trust Veterinary Director has swapped rainy London for a week in Southern India at the International Training Centre to help train vets, animal handlers and shelter workers from all over the country how to run
cost effective and safe neutering and vaccination programmes.
The Centre’s long term aim is to help reduce the number of rabies related deaths in India. The ITC needs more UK vets like Paula to give up their time and support the centre for a week or six months. Over to you Paula… 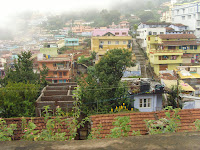 After a 10 hour flight we arrive in Bangalore at 4.30am, temperature around 25oC with a 7 hour car journey in front of us. Destination: Ooty, a small town in Tamil Nadu. Our car drivers await us, my fellow travellers being John Gaye (Vice Chairman of Dogs Trust trustees), James Florence from Worldwide Veterinary Service and Gabriela, a Spanish vet working in Yorkshire (!) who is volunteering at the ITC for a couple of weeks.
If there are any rules on the Indian roads it can only be described as anything goes, namely:
We pass through Mysore and then onto Bandipur National Park – a baby elephant and her protective mother are sighted! Bandipur is in the Karnataka region of India; as we pass into Tamil Nadu it becomes Mudumalai national park. Plenty of monkeys also seen and tiger safaris are available. Sadly no time to stop and spot.
Our first destination is IPAN (India Project for Animals and Nature) where we meet Nigel and Ilona Otter. Nigel runs IPAN; which, like many animal welfare organisations, is run on a shoestring with totally dedicated staff. IThe organisation co-ordinates and runs field neutering projects.
Local animals requiring veterinary attention are also seen at IPAN; to ensure dogs get the right treatment, they are kept in until the course is complete. This is in part due to many dogs being ‘community’ dogs and not kept inside, and also difficulties associated with dosing. IPAN has around 30 dogs that live quite happily at the centre, many of them ending up there by default. There are also several donkeys left over from working in local brick kilns.
Our final destination is Ooty itself, just 500m climb and 36 hairpin bends (they are numbered so easy to count!). We finally arrive around 4.30pm, some 30 hours after I last saw a bed. No point in peaking too early; so time for rest and recuperation, an evening meal and then the most wonderful night’s sleep. Welcome to India!
Monday 31 October 2011 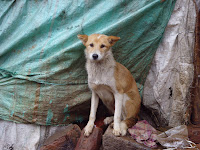 The first day on the Animal Birth Control [ABC] course; the ITC not only train vets but also run courses for managers, veterinary assistants and dog catching, essential to be able to run an ABC programme.
The first half of the day is introductions as well as an overview of the course. The course leader is Dr Ilona, helped by Dr Maiju, Dr Arnand and Dr Gabriela, with me Dr Paula in the wings. The course overview explains that the primary objective is to contain rabies and humanely control the dog population (via ABC programmes). Killing dogs or locking them up will not solve the problem.
The variety of experience of the vets is staggering; many have done no surgery at all or the numbers are in single figures despite graduating some years ago. This in itself shows how important the ITC is.
I was delighted to see a (human) GP on the course. He’s here because in his community rabies is on the increase and he wants to know how to manage it.
The afternoon consisted of demonstration surgery; a dog castrate and bitch spay.
Tuesday 1st November 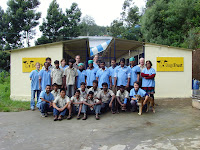 An interesting start to the day; the waiters in the hotel restaurant had clearly decided that I needed help with my breakfast choice and brought, unprompted, rice pancakes and green curry for me. Now I am a fan of green curry, but not at 7.30am; toast and marmalade is truly fine!
First day of operating today; the students start the day by doing rounds and wound scoring on the dogs operated on the previous day which provides some healthy rivalry and a sense of pride among the delegates. Today’s scoring was from the two demo ops from yesterday afternoon only so it was more or less straight in to operating. Each delegate is expected to perform two surgeries each day; doesn’t sound much but try and imagine yourself as a 3rd year student again.
The thing I find staggering is the lack of practical skills amongst these vets through no fault of their own. Even basics such as scrubbing up, putting on surgical gloves and having everything to hand before inserting an i/v catheter are completely alien. I spoke with Dr Neghna over lunch; despite graduating in 2009, he has not performed any neutering ops. He is a government vet (as most are – with a good income and a pension). He gets involved with AI, vaccinating against pasteurella and clostridial diseases in cattle and sheep. The 5 year vet course consists of 4.5 years at university followed by 6 month placements, 3 in agricultural establishments (equivalent to animal husbandry placements in years 1 and 2 in the UK) and 3 months with a government vet where they get no practical experience. With a culture of not questioning senior colleagues bad habits just perpetuate.
I joined in the supervision of surgery today; this is quite scary as you cannot take your eyes off them for a minute. They are simply, through no fault of their own, not used to handling tissues, ligation, suturing. Again, a reminder of how vital the work of the ITC is.
Lectures are held each afternoon; today’s was late as the first day of operating is always long. Perhaps not ideal, however given that we are at around 2500m above sea level, it is important that the dogs are given maximum time to come round from the anaesthetic. Today was asepsis and antibiotics. All dogs are kept in for 2 days post operatively to ensure that they are well before being returned to their own environment (note the change from TNR, trap-neuter-release to CNR, collect-neuter-return).
Finished the day with a Chinese meal (as one does in India); this was definitely the Indian adaptation with Indian level of spices – hot!
Wednesday 2nd November 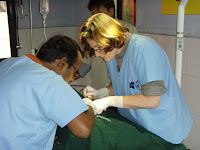 Started the day with more surgery; this time a challenging spay even by UK proportions. The bitch was of good condition score, plenty of fat and tortuous blood vessels. Dr Krishna coped very well, although it’s quite difficult not to step in and take over. I’m so pleased I’m not a 3rd year student again!
Took the opportunity to have a look in Ooty over lunch; there are still some of the old colonial buildings left, including one which is a bookshop, Higginbothams! We were left in no doubt about it being the monsoon season; the heavens opened and continued for much of the afternoon.
Back for afternoon lectures, anaesthetics and analgesia. The good thing about this course is that the delegates are eager to learn and want to know more. There is one, slightly older vet on the course who, when discussing chronic osteoarthritic pain advocated the use of ‘bad leg tablets’ – it transpired these contain omega 3 and chondroitin. This is the same vet that suggested that the ITC should ask the vaccine companies to reduce the antigens in vaccines to make them less expensive; the ITC only receive 445 Rs, around £50, to collect, neuter, vaccinate and return the dogs – this not only includes the surgery and vaccination costs but has to cover the cost of transport and the salaries of the dog catchers as well!
Thursday 3rd November 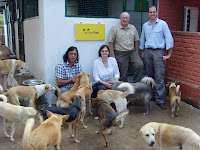