79-year old Margo Giles hurled herself out of an airplane in order to raise money for Dogs Trust and to prove that age is no barrier to having fun and owning a dog. 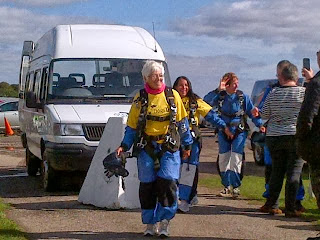 "I did it! I still can't believe I did, it was the most terrifying moment of my entire life sitting 10,000 feet up above the clouds at the doorway of the plane with a little glimpse of tiny legoland through a gap in the cloud.

I was poised only for seconds very firmly attached to George and he just dived, we did a free fall at 120mph. It was so scary I felt like an autumn leaf in a gale force wind when he suddenly activated the parachute, which was like an emergency stop and we were in sunshine.

Once I realised I was still alive it was brilliant with fabulous views over Wiltshire. We did a few swirly things and after checking I wasn't feeling queasy we shot upwards again. So exciting.

Landing in a tiny circle where the others had already landed was so smooth and the exhilaration I felt at having actually done it and was still able to walk and function as normal was well worth those moments of sheer terror.

It was such a super day, no hiccups and the Skyline team were great - we ended up picnicking in the sun. I would thoroughly recommend it to anyone. This must endorse my ongoing campaign for the benefits to be gained for older people who adopt a dog. My next birthday will be my 80th and without Rueben I would never have come across this fantastic experience, not that it has ever been on my wish list, but imagine what I would have missed out on. Everyone has been so supportive and generous and if you can impress your adult children at my age that in itself is an achievement.

I still feel as though I'm on another planet."

Check out more of this daredevil's pics here.
Posted by Unknown at 14:56