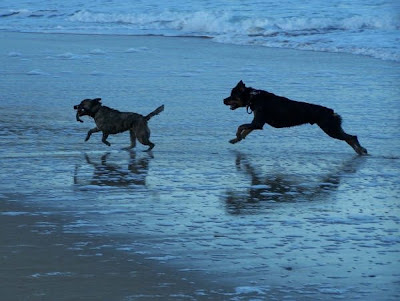 Finding a home for a dog with an ongoing medical condition can be hard, so owners like Sarah Kane who will take on such a dog are much appreciated. Here, Sarah tells Alfie's story:

"It has been just over a year now since we rescued our Rottweiler, Alfie, from Dogs Trust Bridgend. He was known there as Philip!

"'Philip' had spent most of his early adulthood in kennels and was also suffering from elbow dysplasia. He had undergone some keyhole surgery prior to our encounter and had also had lots of hydrotherapy. Due to his condition, he was offered on a part foster basis, but he had been in Dogs Trust for a long while, overlooked by visitors.

"After much thought - and as I already owned a dog with a similiar condition - I could not resist him any longer; after a sucessful meeting with our other dog we took 'Phillip' home.

"One year on Phillip aka Alfie is now 2 years old and you would never know he had suffered from dysplasia; he has made a miraculous recovery, and being so impressed with his development, we even took our other dog to the same surgeon that Dogs Trust used with Alf!

"Alfie is a big boisterous boy, and loves to run flat out in the fields we have near by. He is slightly nervous in some situations but loves children and adults to make a big fuss of him. He is a bit of a soppy dope at times, but you must stay one step ahead of him because he is very clever when it comes to food! Many a times the locks on the cupboard doors have been cheated and we're familiar with seeing a Rottie delighted with himself as he's managed to raid the bin...!

"It is always a risk rehoming a new dog, especially one which is 'breed branded' but with patience and consistancy you will get many years of delight from your new friend. Dogs Trust saved Alfie's life and gave him a new opportunity to have a great quality of life, as well as defying his breed's unfair reputation."

If you have a happy story about your rescue dogs (whether they came from Dogs Trust or not), please email me with a photo and your tale and it could appear here soon! If you're interested in adopting a dog, please visit our website for more information.