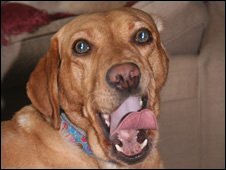 Now, I know my late cats and I started yawn chains back and forth to each other all the time. And it does seem to me that dogs are very attuned to the moods and behaviours of their owners. So today's news that dogs can 'catch' yawns from humans doesn't surprise me, and I suspect I'm far from alone in that.

Scientists believe that human yawn chains are down to empathy, and this evidence suggests dogs are capable of empathising with people - again, no news to dog lovers! I've certainly seen a dog start the process; a dozy Chihuahua once set off a whole bus I was riding on, to the amusement of everyone in it. The key finding with the new research is that they can also 'catch' a yawn from us, and previously it was thought that only humans and close primates could do that.

I know I've managed to get cats to mimick my behaviour before (making them sleepy by blinking slowly at them and, yes, making them yawn after me). Dogs are, as the scientists who conducted the research pointed out, "very skilled at reading human social cues", tending to respond to mood and adopt a posture and behaviour similar to their owner. BBC Breakfast presenter Bill Turnbull couldn't get his two gorgeous inky black Labs to yawn when he did, but when he pretended to sleep they immediately settled down to do so as well - surely this suggests just as much empathy?

In the 15,000 years we've lived together, it's inevitable that dogs and people have learned certain habits together (it's just a shame we can't all be as unconditionally loving as dogs are!). But it's good to have yet more proof of how close and connected a relationship can develop between man and his best friend.
Posted by Dogs Trust at 09:41