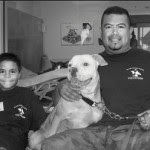 I thought it might be nice to let our other companion animal friends get a look in on this blog, so once a week I'll be posting a tale about the furry, the feathered, the scaly and everything in between! Admittedly today's story does feature a dog but it was too heartwarmingly sweet to pass up.

A Nevada Humane Society shelter was recently handed Angel, a two-year-old boxer / pit bull mix, after his owners moved away without him. He was being walked by volunteer Frank Gomez and his animal-loving nine-year-old stepson, Joel Fontes, when he became engrossed in exploring a particular area.

Since Angel was naturally inquisitive, it took some time before Gomez and Fontes realised there was something more to his investigations. On looking closer, Gomez discovered a box full of orange tabby kittens, who had been abandoned at three weeks old.

While rescue workers were on the way, one of the six kittens escaped. Angel calmly led Gomez over to the lost kit, and she was also handed in safely.

All six kittens and Angel are now safely with the Humane Society and are looking for homes. If you're reading this in the US and are looking to adopt a clever hero dog or rescued kitten, call 856 2000 or email info@nevadahumanesociety.org.

Sadly, it wouldn't be shocking if people were initially surprised by Angel's behaviour given that he's at least partly of a breed that is illegal in the UK and receives bad press elsewhere. But if this doesn't show what good socialisation and training can do, nothing will!

[via Dogster's For the Love of Dog Blog]
Posted by Dogs Trust at 09:21