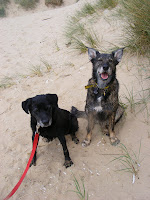 Chris McGrath had vowed not to get another dog after the last one died at the end of 2007. Here she explains how she broke that vow to get two 'oldies' who have filled the house with love:

"When our last dog died at the end of last year we said ‘no more dogs’. We are both now pensioners so have to think about our life span as well as that of a dog*. Morbid? Maybe, but necessary!

"But … the house seemed very empty - we had had at least one dog around for the last 35 years - and there wasn’t any real reason to ‘just go for a walk’. Our daughter, who works in Dogs Trust HQ, finally persuaded us that we needed a dog!

"I first saw Dixie, a crossbreed, on the Oldies website, where Dogs Trust Merseyside had posted details of her. She was 13 years old, which was possibly the reason why she was overlooked, so we travelled down to the Centre to meet her. It didn’t take very long to decide that she was The One and a couple of days later we brought her home. She settled in very well. Poppy The Cat looked a bit confused when they first met but there were no problems at all. 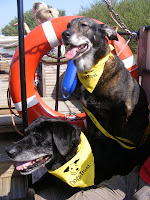 "A couple of weeks later we heard about another old lady, a 14 year old Labrador, who needed a new home. However she was very poorly and we had to wait until we could meet her. A week later we travelled back down to Merseyside to introduce Dixie to Missy. They took no notice of each other! Missy had a very bad skin condition which had made her tummy hairless and very very smelly. Previously she had been living in a garage because of her bad smell. She was also scratching a lot.

"We took her home (with the car windows open because she really was smelly) and it was her turn to meet Poppy The Cat. Again, no problems. In fact the cat didn’t seem at all surprised that another dog had suddenly appeared. With ongoing monthly injections and medicated baths Missy is now a lovely sweet smelling dog and her skin condition is improving. She actually runs (she wasn’t very keen on walking, let alone running and playing ball when we first had her), and both dogs enjoy the beach and going for a swim. We discovered that Missy is also deaf, but she has learnt a bit of very basic sign language.

"We don’t know how long Dixie and Missy will be around, hopefully for a while yet, but they’ve brought so much pleasure to us. Another plus for us personally – Poppy The Cat has stopped waking us up by letting out blood curdling yowls in the middle of the night because she was pining for our previous dog. Her life must have seemed to missing something as well as ours as she had lived all of her 16 years with a dog around.

"So – if anyone is thinking of adopting an Oldie – do it!"

If you have a happy story about your rescue dogs (whether they came from Dogs Trust or not), please email me with a photo and your tale and it could appear here soon! If you're interested in adopting a dog, please visit our website for more information.

*The Dogs Trust Canine Care Card scheme is a special FREE service that give you peace of mind, knowing that Dogs Trust will look after your dog in the event of your death.
Posted by Dogs Trust at 09:04

I'm obviously biased but I think the decision to get Missy and Dixie was one of the best ones my parents ever made...

Ummm, Ben, Tess and Tara (over the last 7 years) are all oakfield Oldies and would be more than happy to have them included, (altho I cant find a pic of Ben on my computers)

It would be a pleasure to add a post about them! Although I note the email address in the post is an old one - it's still active and I will check it, but I would use alex.goldstein@dogstrust.org.uk instead (and I'll edit the post accordingly).

Sadly, Missy is no longer with us but we still miss her. We have since taken on three more oldies, Deano, Candy and Ted. We only had Deano for six weeks, Ted for 18 months. Candy is still going strong, as is Dixie, who's 15 years old now!
Oldies are great!

Thank you for the update! I'm sorry to hear about Missy. It doesn't matter how old they were or how long they were with you, you still miss them a great deal. Thank you for continuing to show how wonderful older dogs can be.

Oh I'm so sorry Chris. 17 is an amazing age, but I know that's little consolation when you're missing a beloved friend.

You know you're always welcome to visit. Please give Candy a big cuddle from us.