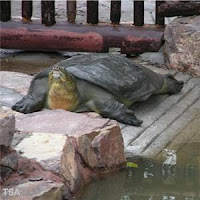 Sioux the tortoise worried her owners when she ambled off from the garden. They were used to her going for a daily 'run' not too far from the house, but on August 7th, she didn't come back.

Having escaped from the garden of her Bellington, Chesham home, Sioux was the subject of a painstaking search by owners Alan and Brenda Thomas, but to no avail. Luckily she was found by a motorist around half a mile (and two fields) away from home.

It was just as well he read the village magazine, because that's how he realised Sioux was a beloved pet and would be missed! She's now safely - and securely - back where she belongs.

[via PetPlanet News]
Posted by Dogs Trust at 14:45