Watch out! Avoiding pet hazards in the 21st Century 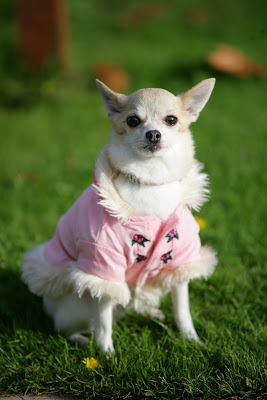 We've all seen pictures of celebrities toting a cute 'Toy' pooch under their arm or in a little rhinestone-studded handbag. It's frustrating to most dog owners because we know that their little legs were designed for walking and that's just what they'll do! But smaller dogs are generally prone to being picked up more often, and just like cats they can catapult themselves out of your arms.

Sugar the Chihuahua (pictured) did just that when she jumped from the arms of her owner's friend - and ended up with a tiny metal plate in her leg. With a broken limb so severe that her owner, Clare Mitchell, feared the dog would lose her leg, Sugar showed amazing resilience under the careful care of a brilliant vet. Her leg saved, she was trotting around just two days after the operation, but "we haven't picked her up since!" adds Clare.

The 21st Century is definitely coming with its own hazards say pet insurers PetPlan. From falling out of handbags to being stepped on by overenthusiastic Nintendo Wii players, modern companion animals are facing dangers previous generations didn't have to worry about. As a result, 21st Century owners are being presented with enormous veterinary bills. Of 3,000 clients polled by PetPlan, over a third had caused accidental damage to their pets with an average cost of £170 to put things right.

Nearly sixty percent of those owners admitted to stepping on their pet (with dogs the most likely victim), with 21% owning up to dropping them (with guinea pigs suffering the most); the next biggest threat was accidental poisoning. Please remember, for example, to keep your chocolate well out of reach of your dog!

PetPlan's Vet of the Year, Brian Faulkner, has this to say:

"Dogs are especially inquisitive and often get under your feet when you are concentrating on something else. Luckily, most of the time they see you before you see them and manage to move out of the way before you step on them but it is not uncommon for vets to have to help them through the odd accidental owner-inflicted scrape and bruise."

In other words: watch where you're going, just in case your dog doesn't!


Disclaimer: Dogs Trust has an arrangement with PetPlan to provide six weeks of free insurance to all new owners of our rescue dogs. You are not obliged to continue with this provider, but we recommend that you consider obtaining pet insurance if you have not already done so.

I have taken to wearing no shoes around the house. I have recently met a puppy who I look after during the day for an hour or so in her own home and she is always under foot! Not sure how she knows exactly where my footstep will fall, but she's always there before my foot!