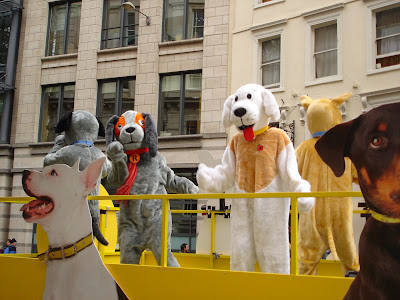 Here at Dogs Trust we were proud to be part of the annual Lord Mayor's Show once again. Our float was dusted off and spruced up, and a new bunch of dogs looking for homes were taken on a lovely long walk through central London.

It was my first year volunteering, and my fiance decided he didn't want to miss out on all the fun. Luckily, he was on hand to ferry Iggle, a 1-year-old Jack Russell bitch, around when she decided she was a bit too tired to continue after spending the morning running around with excitement; she sat on the back of the float with me for the second half of the parade and having been really hyperactive during the morning she did nod off a bit when being held, as you can see from the photo below...

Four members of the canine gang (above) were also on hand in their fluffy costumes to dance away to canine classics such as "Who Let the Dogs Out?" and "How Much is That Doggy in the Window?" (not that we advocate selling dogs, of course!).

For the first half of the walk, which started at London Wall and wound through the City of London, I was bouncing about making sure the other walkers were okay, and then I took charge of Maple, a gorgeous black Labrador and the bouncy Iggle's kennel mate. We were positioned just one float behind an open backed lorry in which sausages were being cooked; Maple had to be persuaded to keep moving and not clean up every single bit of fallen sausage along the way. I also had to stop her bolting off after the lorry! She's a really well-behaved girl, with people and with other dogs, but food and Labs is definitely a challenging combination! 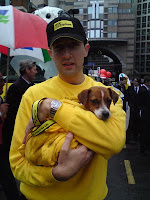 Iggle got plenty of attention, of course, being such a cutie, but we think we found a home for Billy the Greyhound too, when a Westminster councillor fell in love with his graceful ex-racer body and gentle temperament. We're keeping our fingers crossed that it works out for the two of them!

I'm not usually one for sentiment, but it was incredibly moving to see how many people - especially children - cheered loudly at the float and shouted "We love Dogs Trust!" or "thank you!". One woman who approached us at lunchtime showed excellent common sense, asking her children to request permission to handle the dogs and approach them slowly and confidently. She was setting a brilliant example and Education Officer Natalie Dexter and I were very impressed.

My thanks must got to Katy Heaphy and Charlotte Speedy who organised the event brilliantly, and also to Sophia Fergus, who somehow tracked down some rain ponchos at lunchtime, without which might have drowned altogether. As it was we had a very damp, but accomplished, journey home, and everyone said they look forward to doing it all again next year.

All the dogs that walked with us are current residents of Dogs Trust West London (Harefield). Please do call the centre today on 0845 076 DOGS (3647) if you're interested in adopting one of them, or any other dog.