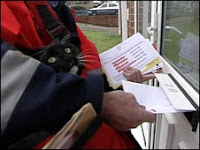 It does seem to be the week for animals and postmen. First you have Orla the otter doing the rounds with her rescuer, Kenny Wilson, and now there's a real life Postman Pan with a black and white cat!

Somerset kitty Charlie (not Jess, sorry!) hid out in postie Nick Lock's mailbag to try and escape the rain; since then he's been accompanying Nick on his rounds. Looking slightly alarmed, if that photo is to be believed, though being a cat I'd doubt he'd be anywhere he didn't want to be.

"Most days now he's about. I think it's because he likes people. I don't think he likes being by himself."

Four-year-old Charlie has a permanent home with Lara Lucas, who lives on the postal route. She's highly amused by his new-found habit!

Well... you know what's coming next! We've had otters and kittens; surely there's a postie-and-dog story somewhere just waiting to make everyone go "aahhhhhhh"?! Comment away, and don't forget to add a link!