A doggy celebration for Canada Day 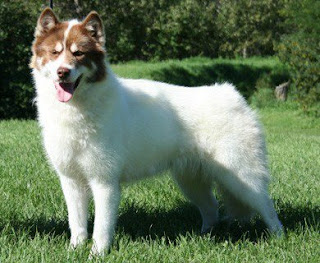 Modern Canada turns 142 years old today! The British North America Act of 1867 was signed on the first of July, giving Canada independence as a country of four provinces. As someone who's always wanted to visit, I'll be popping along to experience a taste of Canada at the Trafalgar Square celebrations tonight, but I thought it honour of the vast North American country I should do a bit of a Canadian-themed doggy celebration. No, no Labradors. Or Newfoundlands. In fact, let's go back to before modern Canada, to the Inuit of the Canadian Arctic and their canine companions...

Canada has produced several breeds of dog, but one of the oldest indigenous breeds - now one of the rarest - is the Canadian Eskimo Dog. It's also known as the Canadian Inuit Dog or Qimmiq, the latter name meaning 'dog' in the Inuit language.

Built for hard work rather than speed, this dog bears a resemblance to a wolf but was used as a working dog for generations, finally becoming less popular with the advent of other modes of reliable snow transport in the latter part of the last century. In common with other sledding dogs like Huskies, they need a phenomenal amount of exercise as well as plenty of mental stimulation, being highly intelligent. As such, they need very special care outside of their traditional home; aside from their need for work, they're built for snow and are prone to heatstroke if the temperature rises too much.

On a day for celebrating the best to come out of Canada, I think this very beautiful dog deserves a mention. Oh, and maple syrup is pretty fabulous, too.
Posted by Dogs Trust at 08:47