Remember Jack? How could you forget?! 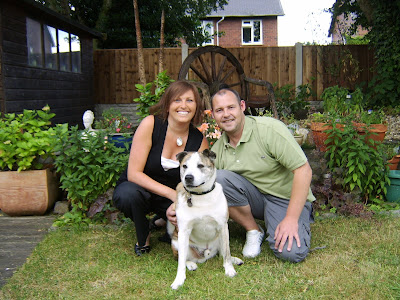 Despite appeals in local newspapers, TV and radio Jack had been overlooked by the public for 16 months, and until last week was still being cared for at the Rehoming Centre on York Road.

Emma, who works at the John Smiths Brewery in Tadcaster, originally visited Dogs Trust Leeds to ask about being a volunteer dog walker. She explains:

“I was on a tour of the Rehoming Centre and my heart melted when I saw Jack in his kennel. My partner Jamie visited a few days later and totally fell for him too; we were both convinced he belonged with us. We’ve only had Jack for a week but can’t imagine him not being here. We don’t understand why he’d been at the centre so long because he’s perfect!

He has been getting lots of cuddles and we’ve even made the garden shed into a little lounge for him where he can get out of the sun. We adore him and he’s being spoiled rotten!”

The team at Dogs Trust Leeds had been flummoxed as to why no-one wanted Jack. Sadly many people don’t consider middle aged dogs, even though they’re often already housetrained and can settle into home life quicker than a younger dog.

“The team and I couldn’t be happier that Jack has finally found a loving family. We’ve always known he’d make a great addition to the right home and we’re overjoyed that Emma and Jamie think he’s their perfect canine companion.

On average dogs stay with us for six weeks before they are rehomed. However Dogs Trust has a non destruction policy and we will look after a dog for as long as it takes to find them the right home – whether this is five weeks or five years.”

Anyone interested in rehoming a resident of Dogs Trust Leeds should call the centre on 0113 281 4920.

for what it's worth, I always previously rescued dogs as puppies, actually, where I lived, they found me. Sadly, my max died two years ago, and last year I adopted Hal, a three legged 6 year old greyhound! i can't imagine life with out him! he's the sweetest thing, and I cherish every moment I have with him. He's appriciative as well. when he goes running, he always stays close and come back quick for a cuddle then he's off again, I think he just wants to make sure i'm still there. and he gets along very well with my other dog mickey! who's also 6. so please consider adopting a middle aged, or older dog, special needs dogs are great as well. you'll see they are not special needs in spirit!
joe Illovsky

Fantastic news.....Jack has found his forever home with Emma and Jamie....best wishes to you all