There are more than just dogs at Dogs Trust Glasgow!

Dogs Trust Glasgow sits in several acres of land and as part of the developments a wildlife area has arisen. Here Glasgow's Assistant Manager, Philip McCarlie-Davis tells us what you can see in the field this July.

The field is a very busy place. When you take a casual walk around you are likely to see three different species of damselfly, we now have the Common Blue, Large Red and Emerald Damselfly. Each of them appear to have favourite areas to live in.

The Emerald Damselflies are living in the reeds of the far pond and have been there in great numbers. 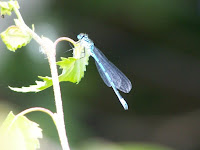 Dragonflies as yet have not been seen in any great numbers this year, as in previous years. This could be due to a couple of reasons; it is possible that the pond is now too overgrown, (but doubtful). The presence of the ducks and moorhens may have had an impact, or it may be that it will be next year that we see more as the larvae take roughly two years to develop.

Also on the field is a pond which has its own families living on it. 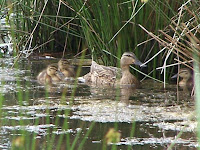 The mother duck is on the pond and has two ducklings. The ducklings are very large now and beyond the reach of the crows and seagulls. They are likely to fledge (fly away) within the next month.

The Moorhens have a brood this year and it was nice to see six moorhen babies at the beginning of July. She appears to be down to five at the moment. The male Moorhen sits at the top of the reed bed and scans the area, if he sees a threat approaching he will call out and the mum and her chicks will dive for cover in the vegetation.

The mother duck has also cottoned onto this and last night the whole group of them were dabbling about at the far end of the large pond. As soon as the male spotted me he alarm called and both the ducks and the moorhens dived for cover.

The recent spell of lovely warm weather has had quite a drastic effect on the water levels in all the ponds. It is possible that if there is not significant rainfall over the next couple of months then the ponds could potentially dry up completely. This is not as bad as it first sounds, as by the time this happens the moorhens and the ducks should be fledged and away to pastures new (hopefully). However there should still be plenty for them to eat.