Beagle 'brothers' have a reunion bash!

In a post from this summer, Looking for Beagle 'brothers', we mentioned that we were searching for any surviving Beagles who had been rehomed via Dogs Trust (then NCDL) following the closure of Consort Kennels near the Forest of Dean in 1997. Well, Wag! editor Deana organised a big get together for all the living Beagles that came forward. Here is her recap of the day:

I was delighted to meet 11 elderly but beautiful Beagles as they gathered for the Beagle Reunion at Dogs Trust Evesham.

The dogs’ owners chatted and compared notes over a cup of tea and slice of Beagle shaped cake, while the Beagles did what Beagles do best: sniff and wag. They were all impeccably behaved, and most were grey in the muzzle and a bit wobbly on their legs, but at 14 years old that’s hardly surprising.

Annette Chinn of Dogs Trust Evesham made a moving speech about the day of the rescue. She’d been among the first people allowed into Consort to remove the dogs. Willow, owned by Mr and Mrs Young, decided he’d really like a slice of cake, thanks, and sang a little song.

For Mark and Deb Eavers, who’d originally suggested holding the reunion, the event was bittersweet, as their beloved Beagle, Grommit, was unable to be there, having passed away just a few weeks ago. Their younger Beagle, Snoopy, attended on behalf of his late pal.

The beautifully behaved dogs then lined up for a group photo, much like any other school reunion, and posed for the camera. Email addresses and phone numbers were exchanged, and with that, all the owners said a fond farewell and headed back home, Beagles and all.

Some photos from the day: 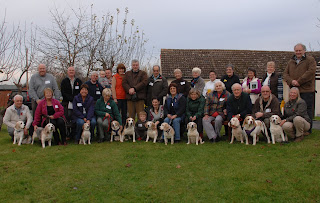 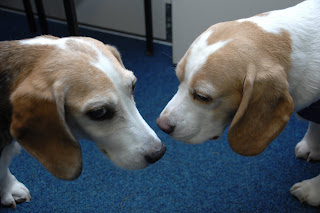 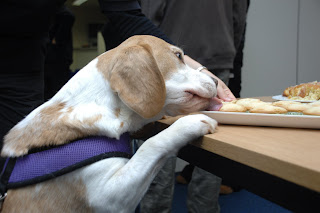 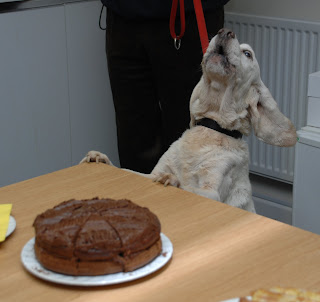 When I read the Wag article, tears streamed down my face for these poor dogs. A wonderful rescue and so lovely to see these last 11 looking happy and healthy.

I can tell by reading your inspirational & moving blog posts that you love your PUPPIES with all your heart! Thank you for sharing this wonderful post!

Awwww. I am totally crying as I am reading this. Beagles are my most favourite animal on the face of the planet and I do as much as I can to raise awareness over the evils of animal testing. This is such a lovely story and I am so happy they have enjoyed wonderful lives. <3