Desert Dogs: How sponsors in the UAE help dogs in the UK 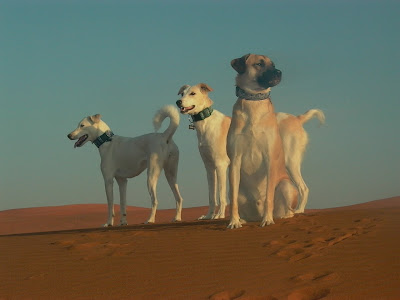 They are all rescue dogs, whose stories you can read below, and they live in , in the United Arab Emirates (UAE).

What has that got to do with Dogs Trust? Well as well as giving their three dogs a loving home, owners Peter and sponsor our very own Sammy at Dogs Trust West Calder.

Despite the distance, it actually costs us very little more to send out sponsor information and updates around the world, so if you want to regularly support our work by sponsoring a dog but you don’t live in the UK or Ireland, you still can.

Peter kindly shared his photos and the dogs’ stories with us when he contacted our sponsor team with a query.

Gem’s Story: Now around two years old, Gem (with the black muzzle) was found wandering the streets of Al Ain at just 6-8 weeks old, back in 2009. As you can see, he’s making good use of a Dogs Trust collapsible water bowl to stay cool. 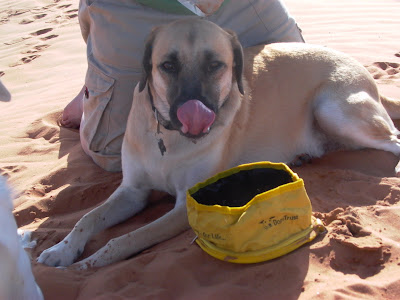 Snowy’s Story: Snowy (the white one, of course!) joined the family mere months later, having been found in the very same street as her ‘sister’. She is now around 18 months old.

Honey’s Story: Already a rescue dog, Honey had been rehomed by a different family. When they were unable to take her back to with them, Honey joined Gem and Snowy.

The happy family of three now enjoys running around in the desert, sometimes in the company of fellow rescue dog Chandri, whose owner is planning to send her to live with family here in the . And when they’re hanging out at home, they have the company of a trio of cats, also former strays who have joined the busy household.

Although 150,000 out of our 215,000 friends on Facebook are in the , we have been lucky to attract supporters from all around the globe. Here are the top ten countries hanging out with us online:

3. – with a few more on Dogs Trust Ireland’s dedicated page

(As I’m* from a Greek family, I’m delighted to see it edging into the top ten there!)

We do love to hear from supporters near and far, and love to think of people around the world looking fondly on their photos of our sponsor dogs, knowing they’re helping us save lives and find new homes for thousands of dogs every year.

Our thanks to Peter for sharing his story and photos and to every sponsor helping us care for dogs.

*Hi! I’m Alex, and I’m part of Dogs Trust’s Digital Team. I’ve been away for a while on maternity leave but am back and blogging for you! Please do ping me in the comments with any topic requests.