I’ve thought about all the things that could go wrong: heatstroke, thirst, toileting, what if I make a child cry? You see these things on You’ve Been Framed don’t you? What was I thinking? No time for that now as it’s the five minute shout. On with the fluffy body, I can’t wear the feet as the suit is already too long for me. The head goes on and lastly my front ‘paws’. The eye holes are small so I can see about a tenth of the normal view and if you’re less than three feet tall, forget it! To combat this I have my minder come paparazzi, Sam, one of our reception team. I grab her arm and we step out into the sun. Cue Chariots of Fire music!

Feeling strange at first, I start waving randomly at people and love that they wave back. I settle into it and spot the micro-chipping stand. After all, it will soon be a legal requirement. It didn’t hurt as much as I thought it would, like a wasp sting I’d say and over quickly.


Our Education Officer Anthea and Rebecca were running the children’s fun area so I posed for a picture with them before they got really busy, Anthea had to move me as I was blocking the sign with my unusually large head, I couldn’t get used to it! In the kids tent there was also a couple of snakes and I even touched one!


﻿
I had always known I was no David Beckham but I still thought I’d manage to get closer with the football game. No prize for me but I did get a sticker, though he did try to put it on my eye which meant I could only see the size of a ten pence piece! I think he just felt sorry for me in this suit. 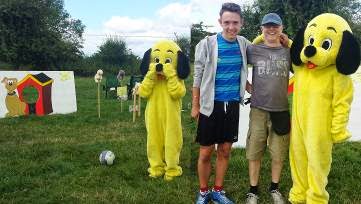 After my dismal sporting efforts we visited the DNA stand which was a highlight of the day for me. It was like an episode of ‘Who do you think you are?’ as I found out my mum was a Chihuahua and dad was a Basset. It does explain my beautiful eyes and large personality! Sam had to pull me away from the dog tombola as I didn’t understand that all the treats were not for me and tried to snaffle some for later.

﻿
We walked along to the bouncy slide where I had to take my shoes off – what you didn’t know dogs wear shoes? Sam wasn’t allowed on it, troublemaker you see, so I had to climb up myself. Not easy with the suit covering my feet and my vision compromised! I got to the top and looked down at my adoring fans! , When I went to step forward I bounced and started falling forward. I styled it out and posed for the cameras on the way down – always professional eh?

Although I was known as the large yellow dog on the day, there was one who was even larger than me! Her name is Dogcilla and she tours around the country letting everyone know about Dogs Trust. I felt tiny compared to her!
﻿﻿﻿﻿﻿﻿
﻿﻿﻿﻿﻿


I have to admit it was bringing out my inner child as I got really excited when I saw the fire engine. I climbed up the stairs to the engine to pose again then it was round to the first aid horse box, yes horse box, as the first aider proudly told us. I hammed it up slightly for the picture; it’s coming naturally to me now!
﻿

After the drama of the first hour I felt a bit tired so it was on to the dog sales stand to try out some of the dog beds. Time for a little snooze, even dogs are allowed tea breaks!