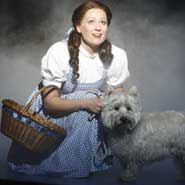 Jude Kelly's unusual summer production of The Wizard of Oz at London's South Bank has the distinction of being the first of its kind in the area for about twenty years. Critics have been in a bit of a tiz, uncertain whether The Royal Festival Hall lends itself to such an ambitious story but still enjoying the familiar tale and rousing tunes.

One reviewer, however, disappointed by some of the human offerings, chose to focus the attention on Toto instead! Bobby the Westie, despite being white rather than L. Frank Baum's inky black creation, inspired The Times's Sam Marlowe to write some glowing words:

"The real crowd-pleaser, however, is Bobby the Westie, as Dorothy’s beloved dog Toto. This appealingly shaggy, snowy mutt may not be the jet-black creature Baum’s book describes, but he displays a playfulness and spontaneity lacking elsewhere in Kelly’s production."

Well done Bobby! You've done Terrier-kind proud. And they say you should never work with children or animals...
Posted by Dogs Trust at 12:19

Speaking of The Wizard Oz, this Sunday, over at Yahoo's The Judy Garland Experience, we will be having a big Oz blowout featuring all sorts of odd and rare WOZ based audio treats.
If you are a fan of Judy's or Oz it will definitely be worth your while to check it out.
Here is the link:
http://movies.groups.yahoo.com/group/thejudygarlandexperience/