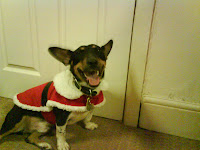 Iona Pippen and her husband couldn't imagine being without their best four-legged friend. But Dexter didn't have an easy start in life. His story, in Iona's words:

"Dexter was handed in for rehoming as a fairly young dog, about ten months old. He had been given as a present to 3 children, who weren't really able to look after him. As a result, he was left locked in a shed day and night, not much seeing the light of day let alone going for a walk. As a result, Dexter became very stressed, living a solitary existance in his shed. The stress also meant he developed demodectic mange (aka demodex) and all his hair fell out. His owners did take him to be treated but the treatment is a series of baths at £40 each. His owners decided they couldn't afford this and asked Dogs Trust Bridgend to take him.

"When he arrived, Dexter had no hair and the staff thought he looked like a little bruiser. Unfortunately, Dexter had another problem aside from the Demodex; he was scared of other dogs. With no proper socialisation as a pup, he had no idea there were other dogs in the world! After a checkup, Dexter was started on his baths. Within 3 or 4 weeks his hair began to grow back and the staff saw that he was the soppiest, softest dog in the world. Dexter was then advertised for rehoming.

"We had thought long and hard about getting a dog and I had spoken to Dogs Trust staff on the phone a few times about getting a dog before we took the plunge. We were scared in case the centre was a harrowing, upsetting place but we couldn't have been more wrong. We found the office and spoke to the staff, who gave us our forms to fill in, we sat for ages pondering the 'right' answers but we got there and set off to look for our special companion. We saw 2 dogs we liked initially before finding 'Quiet Corner' and seeing a picture of a lovely little terrier with a wide smile. Sadly he wasn't in his kennel but we felt a connection with this little dog and we were quite upset that he was obviously gone. We walked back to the office. On our way we saw this little, happy dog pulling his way toward us; it was Dexter, the little dog we'd just thought had been rehomed. Dexter was on a walk with his carer. We asked his carer if this was Dexter and was he still available and she said yes. We spent a few moments with this little wriggly dog, who seemed so overjoyed to see us. I think it was confirmed he'd adopted us when his carer said 'I've never seen him so happy'. The carer took Dexter back and we looked at each other and said 'That's our dog' but we had to find out if we were going to be suitable for Dexter. As it turned out, the 2 other dogs we had shortlisted wouldn't have been suitable, one disliked cats and one needed a large garden.

"The staff then told us about Dexter's past. He had been so depressed when he came in, he missed his family, he was mistrusting and hated other dogs; he'd also be at risk of developing demodex again, he'd need lots of time and attention, lots of walks and to come back once a week for his special baths. There was no doubt, he'd adopted us, we'd fallen in love and there was no going back, no matter how much TLC he needed! We took Dexter for a walk and met some more staff, who also said he looked right at home with us, so it was decided. It broke our hearts leaving him behind on that Wednesday. We comforted ourselves in as much as we hoped he'd be home for the weekend and decided, somewhat prematurely, to buy a lead on the way home!

"Still, we had to have the home visit. We were so nervous about this but we needn't have been, the lady who came on the Friday said we'd be perfect for Dexter and she was happy with everything!

"Saturday 15th May 2006, we picked Dexter up. Initially it was hard with Dexter, he didn't know how to live in a household, he'd do his business on the carpet, he'd pee up against furniture. It was hard. He was still attending Dogs Trust once a week for baths. Dexter also had an issue with other dogs - only catching sight of one would sending him into a barking frenzy which would take ages to calm down from. Life with Dexter was hard but the joys he gave us in those first few weeks were immense. Sadly, Dexter had lost his pupppyhood but we went about starting from the begining, making play fun, spoiling him, teaching him basic commands. Dexter isn't the brightest spark in the box but he's developed into a fairly intelligent boy now, after 2 years.

"As Dexter hadn't been walked much, he used to tired easily but now he can walk for miles; he still gets just as excited though as he did when we took him for that first walk.

"Dexter is now 3, he visits his friends at Dogs Trust Bridgend at Christmas and sends them some treats. He'll also be going back to Bridgend soon for Dog Training and agility as he still is very very unsociable with other dogs. We've been up to see the staff a few times and everyone has said how happy he looks and what a fantastic happy ending he has had.

"Dexter has his own little fan club around our area, he loves the local children and they love him. Dexter has also learnt to love cuddly squeeky toys and play with them until destruction - this was the dog who didn't know how to play or what play really was when he came home - and he's also excellent with our cats.

"Most importantly, Dexter's demodex has never returned, he has a lovely coat of hair. When we had him he had no fur on his front paws - it's still a little thin but Dexter did have one of the worst cases of demodex staff had ever seen, so much so he was named after it. We'd almost called our cat Dexter and went for Baxter at the last minute; then, when we had his medical card from the staff, we noticed he'd been handed in on our wedding day. I think things were just meant to be.

"Dexter means the world to us, we're immensley thankful to the wonderful, caring staff at Bridgend, it is truly a testament to their love, care and hard work that Dexter made such an amazing recovery.

"I think he he still quite famous at Bridgend! He's appeared on BBC website for Welsh Christmas photos and he is a much loved Grand-dog too! In fact, he's spolit in so many ways!"

If you rescued a dog and gave him a happy ending, just drop me a line and you could see your story here.
Posted by Dogs Trust at 10:53