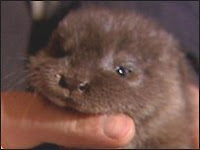 From time to time, I reserve the right to veer away from dog news for a bit for the following reasons:

This definitely falls into the 'cute' category.

Postie Kenny Wilson discovered a young otter lying alone near the roadside while doing his rounds. He scooped the weakened little creature up, cradled her in his post bag, and thn realised she was hungry. He thought that kitten milk might be a reasonable foodstuff, so bought her some and dribbled it into her mouth through the barrel of a ball-point pen! After taking her with him on his rounds, and to a car rally he was due to attend, he delivered the otter - now known as Orla - to a rescue centre.

Thanks to Kenny's prompt care, little Orla survived and is now gulping down £15 worth of salmon every day with the kind aid of a local supermarket (otters are part of the weasel family, some of the smallest - and most deadly - carnivores in the UK).

And if that's not doggy enough for you, then here's an otter fact: otter young are known as whelps or pups. See? Totally relevant.

Lis of the North said...

It doesn't get much cuter than that!