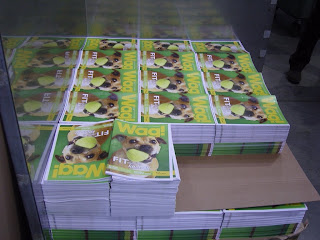 Over 600,000 supporters of Dogs Trust receive Wag! magazine, a thrice-yearly update on all the goings on in the canine world. From behaviour advice and breed features to rehoming appeals and letters, Wag! covers the range of activities and allows supporters a unique insight into the Dogs Trust world.

For the last six years, Wag! has been compiled and edited by Deana Selby, and she decided it was finally time to head over to Eclipse Colour Print in Kettering, whose job is to produce the thousands of copies that will find their way to eager readers. In the past, once it had left her desk and the proof was approved she had never personally observed the production process, so she was excited to get a chance to watch her precious project come to fruition. 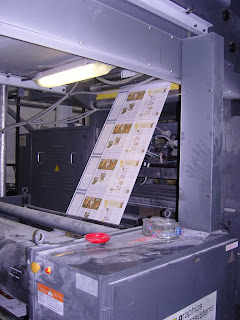 Indeed, "excited" was a word that came up repeatedly in my conversation with her on her return! As her photos show, Eclipse is housed in a huge industrial complex with a sheet press (which was thundering out copies of the Next catalogue at the time) and the web press that Wag! is produced on. The thumping of the press was deafening, so ear protectors were provided, and Deana was quite intoxicated by the fresh "felt pen" print smell!

All around her she could see vast reams of sustainably sourced paper which looked, she commented, "just like big stacks of loo roll!". The covers take around 12 hours to print, with the inside copy taking another day or so. Deana was talked through the process and given a colour proof to examine, being shown how saturation of ink can be adjusted to change the final product. 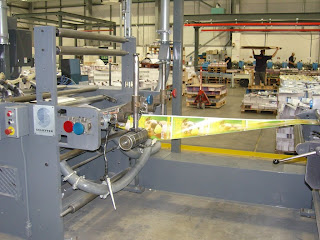 "It was so much bigger than even I expected," said Deana. "It's vast and so noisy, but it felt wonderful watching piles of print emerge."

Deana spends several weeks preparing each copy of Wag!; this involves writing and commissioning articles, obtaining images, planning and consulting on layout and replying to the massed heaps of correspondence from Wag! readers. Together with the web team, there are plans to launch an e-version of Wag! during the course of the year which will help reduce paper use and postage as well as being more inviting to the online generation.

Watch this space for more information!
Posted by Dogs Trust at 14:23

That's so cool to see how a publication is created. Thanks!

I AM WITH DOGS TRUST AND I SPONSER FREEDIE