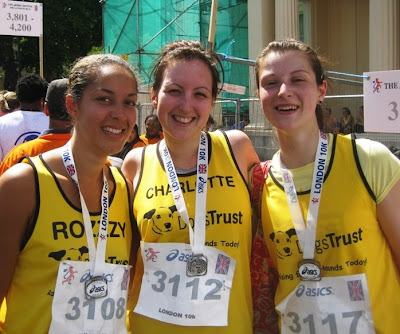 Hi, my name is Charlotte (above, centre) and I’m the Supporter Relations Officer at Dogs Trust Harefield. I love working for Dogs Trust and this year I wanted to run that extra mile to raise pounds for hounds! Last year I jumped out of a plane for charity, but I’m no good with heights - so this time I decided to do the British 10K Run through Central London!

Here are some excerpts from my diary:

It’s official – I’m doing the British 10K London Run in aid of Dogs Trust! Have also entered my two friends Roz and Hollie to run with me – although they don’t know it yet… I’m petrified, I can’t even run 10 metres! And I’m a chocoholic – I hope I don’t have to give up chocolate?! Had better join the gym methinks….

Pheeew! Have been training steadily for two months now. I’m running about 5k at the moment so still a long way to go, but my brother Stewart has done the London Marathon twice so he’s been giving me lots of tips. All this exercise is hungry work though – I can’t stop eating!

It’s been a very busy month here at the Harefield Rehoming Centre, we’ve just held our Summer Open Day and Fun Dog Show which raised over £17,000! I feel exhausted now though, and because I’ve been so busy at work I haven’t had time to train for over two weeks! Better get back into the swing of things tomorrow…

I’ve had flu and bronchitis for the last three weeks and have been unable to do any training  The run is less than three weeks away, and I’m really worried. So many people have been kind enough to sponsor me and I don’t want to let them down. I am on the mend though, a few more days and hopefully I’ll be back on the treadmill….

Only one week to go!! Feeling excited about next Sunday, we have all been training lots over the last two weeks, but I still don’t feel prepared. Hollie and I went for a 10K practise run earlier along the Thames, I really enjoyed it! My calves are killing me though – can’t wait to tuck into a huge bowl of pasta and then a bar of Cadbury’s Dairy Milk!

I can’t believe the race is tomorrow – it’s come around so quickly!! I’m feeling quite anxious, I wish I could have trained more beforehand. And I have blisters all over my feet from my trainers – yuk! Thankfully, the weather forecast is great for tomorrow, it’s supposed to be a cool, crisp morning with bits of rain – perfect for running. Need to make sure I get a good night’s sleep….

6.30am: Woke up in a bad mood after two hours sleep – our next door neighbours decided to have a (very loud!) house party until 4am this morning! How inconsiderate! Roz and Hollie came over at 6.30am and we all had a big bowl of porridge, half a bagel and a cuppa. The bad mood soon lifted and we were all in high spirits as we got on the tube to London, lots of fellow runners on board!!

9.00am: I couldn’t believe how many people there were when we got there, I even bumped into an old friend! 30,000 runners and thousands of spectators!! But the weather was getting hotter and hotter, so much for a cool start to the morning

9.35am: And they’re off! The streets through Central London had all been closed to the public for the race, and it was such a buzz when we first set off through Piccadilly. Me and Hollie jogged along together, but Roz raced off in front of us - she’s a really good runner.

10.05am: When we reached the 3k mark I was already feeling the strain and the sun was so hot, I could feel myself getting sunburnt. The crowds of people cheering us on were great – but also overwhelming. At 4k I was feeling ready to give up and walk for a bit – but then I saw my mum and dad cheering us on from the sidelines!! It was such an uplifting moment, and really spurred me on to keep running.

The race was so inspirational with so many people running for different charities and causes, and during the low points we kept reminding ourselves why we were going though this pain (and humiliation – no make-up, sweaty, beetroot appearance!) I kept thinking of Patty, a gorgeous little Bulldog who had been used for breeding and tied up in a shed for 6 years. I fell in love with Patty when she came to Dogs Trust earlier this year, and I couldn’t believe that an animal that had been so badly treated could still be so affectionate and trusting towards humans. Dogs Trust gave her the second chance she so desperately needed, and found her the perfect family home where she will happily live out the rest of her days.

10.45am: The whole run was so much harder than I imagined, both physically and mentally, it seemed to go on forever! But the final kilometre was brilliant - we could see the end and started to sprint to the finish! It was a really emotional moment when we crossed the line, and we were all so excited to receive our medals!

If you're interested in signing up for a Dogs Trust charity run, check out our sporting events page or drop the fundraising team a line by email.

Well done!
I went through similar story..running my first 10k and raising money for DogsTrust...it was a great experience!

I wish I could do it! I'll be seeing Charlotte at Harefield tomorrow and I'll be adding my congrats. :)