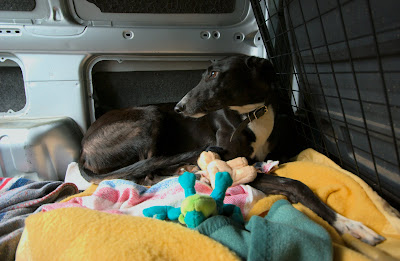 You might have seen this on our other networks, but as I now have an image to share and Poppy still hasn't been found, I thought it best to blog again.

Two year old Greyhound Poppy was rescued by Loanhead charity Gracehounds three months ago and was being transferred to the Dogs Trust centre last Monday (16th November) when she slipped her harness and fled.

Staff from both charities have searched the local area extensively for the past eight days and are highly concerned for the dog’s welfare.

Kind-hearted members of public have already reported two sightings of Poppy near the Brucefield area of Livingston but she has not been seen since last week.

Poppy was wearing a collar when she went missing and has been microchipped.