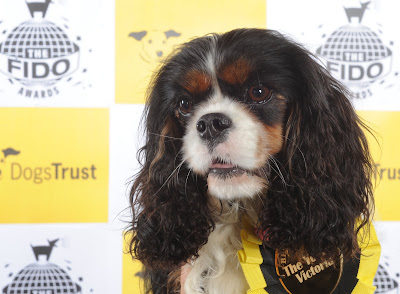 The Fido Awards, presented in association with Dogs Trust and honouring canine cinematic excellence, were held at the BFI Southbank last night. The list of categories included the first ever Dogs Trust Star of Tomorrow Award.

Amongst the winners present to accept their awards handed out by presenters Kerry Fox, Christopher Biggins, Camilla Rutherford and Fenella Fielding was Tori (aka Dash, pictured) from The Young Victoria, Syrus (aka Tennants) from Fish Tank and Paddy, a six year-old crossbreed rescue dog from Dogs Trust Darlington, winner of the special Dogs Trust "Star of Tomorrow" award, the first of its kind at the ceremony.

This year's judging panel was made up of leading film critics and writers, including: Derek Malcolm, EVENING STANDARD; Angie Errigo, EMPIRE; James Christopher, THE TIMES; Kaleem Aftab, THE INDEPENDENT and Charles Gant, HEAT.

Well done to all the winners!

Whats the bread of the dog in The Young Victoria movie?