A happy ending for Hubble 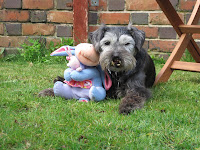 When Hubble came to us for rehoming, his unusual looks caused a lot of comment. Between his appearance on GMTV and supporters seeing his story online, he fast became one of our most memorable residents. I had the honour of meeting the gorgeous little chappie and he stuck in my mind as one of the friendliest, most trusting dogs I'd ever met, in spite of his unfortunate start in life.

Hubble is now living with devoted owners, who sent us this fantastic update on everything the so-called 'world's ugliest dog' (now surely one of the world's luckiest?) is getting up to.

Hubble has settled into his new life beautifully; he has become so relaxed and content with his surroundings. He lives in a village with the countryside just outside of the front door so there are plenty of interesting walks. Having said that he loves to travel in the car and does enjoy days out at the beach, or further in land where he can mess in slow moving water or ponds. Hubble doesn’t worry too much about the location he is just happy to be included in what ever is going on.

People do look at Hubble and the reaction is mixed, mostly it is positive. He does look cute and I have heard several people say that he looks as though he is smiling.

Hubble is quite deaf although he can hear some sounds such as clapping, to communicate we have developed a few simple hand signals which he recognises easily and is happy with. He is also unable to bark he has no voice at all so he is very quiet. He does love his food and has no trouble eating at all, especially his little treats of gravy bones or chewy sticks.

Hubble enjoys playing with his toys, they have to be soft toys though as his mouth can be a little delicate and we try to avoid any 'normal' dog toys. We have just bought him a little pink princess ball and he seems to love dashing around the garden to retrieve it, the only problem with this game is that as soon as he gets it he takes it straight to his bed for safety! It becomes a very slow game. Hubble has his own chair beside the window with his red tartan blanket for comfort; he does let you sit on his chair sometimes, as long as he is sitting on your knee! Hubble loves his cuddles -he is a very loyal affectionate dog.

Hubble came into our lives at the right time as we were missing Hector who was a larger than life 14 year old Yorkshire terrier who died 3 months before Hubble came to stay. It was a chain of events which brought Hubble to us, It was not planned, I saw him on the internet when some one at work had the Dogs trust web page open and I just knew he needed a home and we needed him to come and live with us. It was as simple as that. He has a huge personality and a special way about him, he is silent but he has an amazing presence about him. It was a happy day when the people at Dogs Trust decided that we could adopt him.

Hubble spends a typical day enjoying his walks, eating his food, snoozing in the garden, when the mower is on he likes to be close by, always ready to work, a sign of his past I feel. These days life is a lot easier for Hubble and he enjoys pottering in the green house as this year’s plants are being grown. When he walks around the village there is one gentleman in particular called Steve who Hubble loves to see as he carries little dog biscuits and Hubble can spot him from a long distance and waits with quiet anticipation for the biscuits Steve has in his pockets.

There is loads to say about Hubble and I'm not sure this does him justice. We just all live in the same house and get along just fine doing ordinary things, just as i think Hubble likes it.
Posted by Dogs Trust at 10:22

It is really heartwarming to read of Hubbles happy ending. The staff at Dogs Trust seem to have a way of connecting the right dog to the right people. We have a happy ending of our own with Taz, (Or killer Taz as he was known by some at Kenilworth!!)He has become a, nearly, normal dog and is getting more settled with being with people. We all need more happy endings to be shown these days. Well done to Hubbles owners for giving a 'social misfit' as some would have seen him, a chance. I think he's gorgeous.

What an absolutely beautiful story, I am so pleased for this little chaps happy ending!

Just lovely lovely lovely. Thank you for giving Hubble such a wonderful home and life. You all deserve to be very happy together. best wishes, Jan xx

Oh wow...I think Hubble is gorgeous. You can see in his eyes that he is happy now :-) Well done to his owners xx

What a wonderful story. I love happy endings.

I hope many people read this and give a shelter dog another chance.

I have had the good fortune to have met "The Hubster" on numerous occasions.He is such a character and absolutely loves his cuddles and having his tum tickled.He really does radiate a sense of peace and contentment with his life and surroundings. He sits with his head held high like a wise old Sage who knows he is most definitely "Home"..."His Hubness"!.If any soul was to fill the huge void left by Hector, then surely it was Hubble. Long life little fella