Dogs Trust Loughborough... a year on! 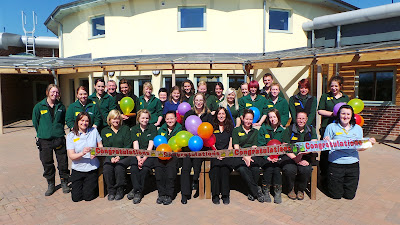 1st May 2013 marks exactly one year since the full team started working at the centre in Wymeswold, Loughborough.  The building was finished and the time had come for everyone to come together and begin the induction into their career at Dogs Trust.

The day began with introductions to key personnel from Head Office before the Management Team were introduced.  The team were then allocated of uniform, handbooks and lockers before getting a guided tour of the centre by Paul who had designed the building.  The centre was now alive and already everyone was counting down the days till the barking started and the dogs arrived!

Receptionist Sam remembers this time fondly, “There’s nothing more nerve-wracking than starting a new job, but knowing that there were 30 other people starting with you helped turn the nerves into excitement! I can remember the first four weeks leading up to the first dogs arriving as if they were just last week, and I am very proud to say that I have been a part of the past year’s accomplishments that all of us at Loughborough have achieved! I look forward to us continuing our success in the years to come, and thank everyone who has visited us for all their support.”

Kelly joined Dogs Trust Loughborough as an experienced Vet Nurse Assistant and says: “The 1st few days were exciting but daunting as everyone was getting to know one another. But it wasn’t long before we all became a team, especially when the dogs arrived and the real work started. The thing that stands out most about our induction time was all the people from head office and different areas within dogs trust and how each and every one of them was genuinely passionate about the welfare of dogs and how to help and improve this in the future”.


Walking through the reception doors on the first day, I was nervous to meet the new team but at the same time I was filled with excitement to start my new role. Ever since that day I have never looked back!


The past year has gone so quickly, with some great stories to tell. Every day is different, one day you could be planning the first Summer Show, the next you could be filming the dogs playing in the snow. One of the big highlights was our first Xmas Fair, which raised a massive amount of money thanks to the amount of supporters we have gained in the area. We saw so many of our dogs coming back to say Merry Xmas and of course to come and see Santa Paws, they all looked so happy with their new forever families. My personal highlight was of course adopting my blue merle border collie Moss from the centre, who I would never be without”.

Claire moved from the Glasgow centre to be part of the Loughborough team and as the Assistant Manager Admin remembers those first few weeks “being super busy sorting kennel routines, ordering cleaning supplies, food bowls, beds and everything to make our first dogs comfortable when they arrived later that month. It was really exciting for the site to finally be ours, although I was worried I was going to get lost as it was like a maze at the start! It was great to meet all of the team and there was such a buzz about the place. The best moment during this time was when our first dogs arrived, at last the kennels were full of barking, excited and waggy-tailed canine residents, all looking for their new homes. This was what we were here to do!”

It's just a matter of weeks until the centre celebrates its first birthday and with a full of fun events and activities taking place, please do pop down and join in the fun.

For more information on taking part in the dog walk or non-uniform day please email Loughborough@dogstrust.org.uk

Meet some more of the team.... 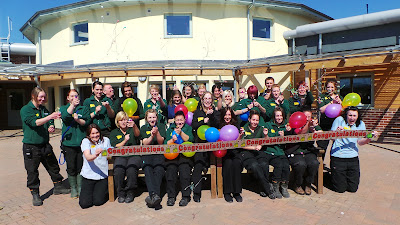