Where do we begin!? Thursday 3 October was certainly a different day for the dogs and the staff at Dogs Trust Loughborough. We were being filmed for the next Dogs Trust advert!

Bright and early, the film crew started pouring into the centre. The dogs couldn't understand what was going on and started asking each other questions about who these strange people were and why they were coming in so early in the morning. True to form, they all reacted in their own ways:

Some of them wondered if a celebrity was arriving. So, in a dash, they made themselves look glamorous. 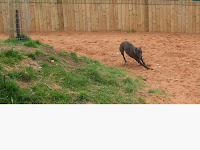 Others ran around in excitement. 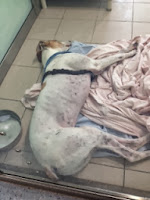 And some... Well, some just didn't want to be disturbed!

But eventually everyone was told that the Dogs Trust advert was being filmed at our centre and it will be shown on national TV in November. How exciting! 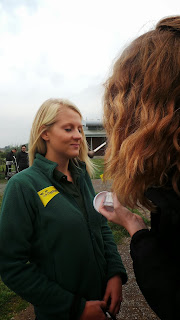 We weren't used to this kind of treatment - Claire was having her makeup done for her, which is a bit different from cleaning out kennels and being pulled around a field.

Louis, a Terrier Cross, practised his rolls and tricks with Jemma the Canine Carer. He loves to show off!

The stars of the day were Ralph, a Foxhound, and Buttercup and Blossom, our Saluki Cross pups. They were so well behaved. Ralph loves the pups so much that he actually shares a kennel with them - we even took to calling him Mummy Ralph, which we think he quite liked! 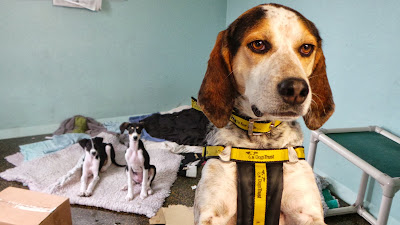 After a long hard day, everyone managed to get their heads down and have a snooze. It's hard work for the dogs to look as good as they do all day. Wish we could show you a preview but you'll have to wait until November.

I wonder if all these guys will have been rehomed by then?

That could very excited i am waiting for that.