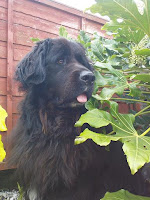 A while back I asked any readers of our various social networking sites to send me happy rehoming tales (whether through Dogs Trust or not). I'll be posting the stories from time to time, and here is the first, from Paula Abbot about her 'Newfie', Flossy.

“About four months ago, I had a phone call late in the evening informing me about a Newfoundland that had been handed into the kennel.

“The following day as soon as the kennel was open, I was on the phone; then I went down to see her.

“It was a horrible rainy day, but we still made our way to check her out. When we got there the lady was a little concerned about what we might think as the dog was so obese. And she was ridiculously fat! Luckily the vet assured us her heart was fine considering her weight and there were no obvious signs of poor health, thank goodness.

“My heart went out to her as she was so adorable but so fat with badly matted fur.

“Since Flossy was handed in rather than found, she was already neutered. We collected her the following day and introduced her to our baby Newfie, Nala, and the other dogs in our home. She spotted the paddling pool, sat her large behind in the water and was very happy! My other dogs are well socialised and friends and family come to socialise their pups with my pets so it’s a little like a crèche sometimes…

“The reason for Flossy’s weight gain was that she’d never eaten dog food, only sausages and the like. She was so fat that getting up was an effort. She ate only gradually, and after a while she was even weaned from one commercial dog food to another. She had to be bribed with food just to go on her first walk! She would stop dead and I’d have to drop her lead and walk away before she’d start walking and catch up. Her pads went sore very quickly because she was unused to walking on hard surfaces. Her owners must have paid around £1000 for her and then neglected her.

“By the time of her first injection and checkup after coming home, Flossy had lost two stone and, with the help of some joint supplements and being careful not to overexercise, she plays happily with seven month old Nala, running along the beach and sand dunes. She’s even won an amateur dog contest at a retirement home which Dogs Trust attended.

“I couldn’t be happier with how well Flossy’s settled in after just three months.I’m now known as the lady who walks her two bears down the street!”

We wish Paula and Flossy all the luck in the world. Remember that you don’t have to be punishing a dog to be hurting her – overfeeding, lack of exercise and little attention can be just as hurtful.

If you have a Happy Dog Story to send in, just email me!
Posted by Dogs Trust at 10:53