Book Review: One Dog at a Time by Pen Farthing 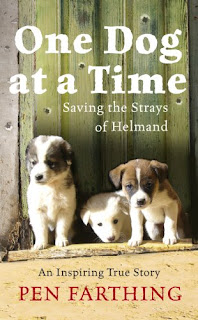 Book two of our Ebury Book Club on DoggySnaps is this sometimes harrowing tale of a Royal Marine rescuing the street dogs of Afghanistan. The discussion is due to start soon so head over and join us! You can also get in some questions for Pen to answer before the discussion kicks off.

Pen Farthing has always been a dog lover and owner, but it's quite clear from the tone of mild incredulity with which One Dog at a Time is written that even he did not expect to be where he is now: developing a charity that is aiming to raise standards of welfare for the street and fighting dogs of Afghanistan.

With an autobiographical tale such as this one, it's often hard to separate your feelings about the story from your feelings about the book itself. But Pen's writing does stand out; his keen eye for observational detail brings to life not just the dogs but the desolate setting of Now Zad, the fierce battle with the Taliban for the hearts and minds of the exhausted Afghan people and the ups and downs of military life.

I expected to find myself feeling sick and angry over the abuses carried out against street dogs goaded into fighting, and I did. But more than that I found myself thoroughly involved in the details of Marine life, and the hardships (missing family and pets, making the most of limited resources) and highlights (an unexpected Christmas meal, making friends with people you'd never meet otherwise and feeling you've made a difference) of a military existence. I read the book because it was about dogs, and put it down feeling I'd learned an awful lot about people, too, which makes the potential audience for this tale far wider than I'd anticipated.

And what about the dogs? Well, there's no doubt that some of the situation is harrowing. There are details you wish you didn't know, but once you do you understand very clearly why someone would go to the lengths Pen did to organise a rescue. He is keen to modestly note that he had lots of helpers in and out of the country, among them his fellow Marines, his wife, Lisa, and Mayhew International. And it did have an emotional toll on him; in one chapter you follow how he is tempted to throw in the towel as the bigger picture - who, for example, would rehome an ex-Afghan fighting dog? - becomes apparent. His struggle to separate heart and mind and do the right thing is very moving.

I began an autobiography, but feel like I read a novel. I consider that to be one of the strongest points of One Dog at a Time and the basis on which I would recommend that many read it.

Pen's story, of course, does not end with the last page of the book, as he and Lisa now run the Nowzad Charity to relieve the suffering of stray and abandoned animals, particularly in Afghanistan.

Incidentally, while reading the book for the Book Club and this review, I was contacted by fellow Twitterer @bentherotti, whose family know Pen personally. They have nominated him for a Dogs Trust Honours award in the Dog's Best Friend category. I wish him luck with this! Nominations are still open, so if you know someone deserving, or a potentially award-winning dog, please submit their details to us on the Honours website.
Posted by Dogs Trust at 10:01

Fantastic review, I would highly recommend this book to everyone. Not just because we are huge supporters of Nowzad but because it is an absolutely fantastic read that will appeal to so many.

It's a book I will undoubtedly read again, we just need to convince Pen to get started on Book number 2 now :)

I have seen similar issues in other foreign countries in that part of the world, and there is so much work to be done. Great recommendation...

I'll have to get my human to read that to me. Thanks for a great review.

Me too. Though the chances are she'll still cry through it. She's terrible that way. I'll persuade her to read it though. A good review, thank you.