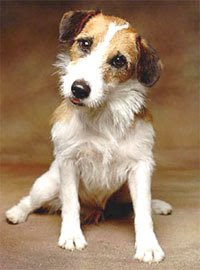 With the recent releases of films like Hotel for Dogs, Beverly Hills Chihuahua and Marley & Me, dogs have had a real chance to take centre stage in entertainment recently. There was even that revival of The Wizard of Oz where Toto got better reviews than his human companions!

So which are the best famous dogs out there? Here are three of my favourites; let me know in the comments if you agree or disagree.

I was on the verge of adding Dog, the confused hellhound from Pratchett and Gaiman's Good Omens, when I remembered Gaspode. Seriously smelly and the host of several unpleasant diseases "including licky end, and only pregnant sheep get that", Gaspode never the less earns his self-applied wonder dog title thanks to two key attributes: his street smarts and his ability to speak out loud. Sensitive to changes in the magical fabric, Gaspode picked up the talent of speech in Moving Pictures but comes into his own as a character in Men at Arms and The Fifth Elephant. He's bright, downtrodden, funny and generally a little disgusting. But loveable.

An odd choice I know, considering the film is about cats and the dogs aren't exactly the brightest sparks in the crew. But their daft double-act is among one of my favourites on film, ever. The dopey pair - one a Bloodhound, one a Bassett - are military minded with Lafayette the few brains of their operation but Napoleon the self-styled leader. They handily take out the villain of the piece, Edgar the butler, with their slapstick and constantly bicker in their lazy, Southern American accents (despite being Parisian), adding warmth and humour to the film.

One of the best dog characters who remains resolutely doggy, Martin Crane's Jack Russell companion manages to raise laughs just sitting still with an alert, intelligent expression on his face. The character is basically a target for Frasier Crane's neurosis, responding to the rest of the family with near-human understanding but seeming to taunt to good doctor. Eddie was played initially by dog actor Moose, who sadly passed away leaving his son, Enzo, to continue the role. A loyal companion, Eddie is cute, well-trained and bright; the perfect dog companion, in other words.
Posted by Dogs Trust at 13:44

No doubt in my mind, Eddie was the coolest - smart & feisty!
Chris@BarknTalk.com

Great fantasy books but the Disreputable Dog is the embodiment of a faithful friend.... Even if he isn't entirely what he seems!