I'd love to have been in the room when Wired PR were discussing ways to mark the release of Disney / Pixar's doggy flick Bolt on DVD. The Finsbury Bark turned out to be an intriguing idea: trying to break the Guinness World Record for the loudest bark!

Held with the advice of RSPCA professionals and with assurances from the organisers that they want to promote responsible dog ownership, The Finsbury Bark takes place on Monday 15th June and anyone's invited. Click to enlarge the flyer below to see details of registration (I believe there's a fluffy toy in it for you!) and find out more about the event.

Good luck breaking the record, folks. At least in the park you won't have to worry about being noisy neighbours! 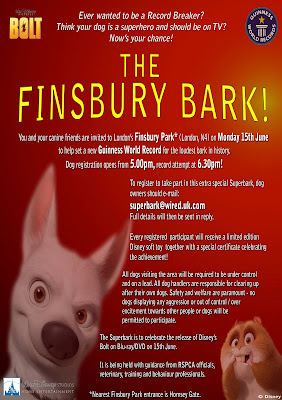 wish it was a Saturday or Sunday! Would have loved to have joined in but wont be able to with work and child.....boo hoo.

worth the effort !! had a lovely time despite the rain !