Yesterday, Jacqui, Lo and I were looking at the Dogs Trust Facebook Page and thought, "wow, over 63,000 people supporting us now". Jacqui mused on how much could be done if all those people got involved to actively support us. So, on the spur of the moment, around 11am, we sent out a message: 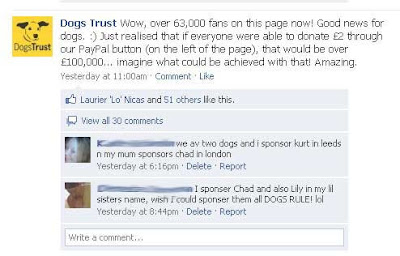 The response was... amazing.

Within minutes, the donations started flooding in. Many gave £2, but the donations varied wildly according to how much people could spare; ultimately the average was about £4. All sorts of people took part: people overseas, people who already donate or sponsor, people who went on to become sponsors or members because of this, people who just thought it was as good idea and wanted to hit a high target.

What was brilliant was how many people posted to tell us why they'd donated. Others started a trend of donating from or on behalf of a specific dog, posting pictures which really gave everything a positive, happy feel. We left it up to the group to decide how often they wanted total updates; they were the ones doing the important bit, so they got to call the shots! In the end we let them know at around 5pm that we were near £1,000, and shortly after 11am this morning - around 24 hours after beginning - £1,500 had been raised.

If you think about it, that's almost a pound for every dog in our care.
...and the odd donation is still coming in.

Now we're getting feedback saying we should do this once a month! We're holding back on that as, although 370 people took part and made this their own, we don't want to alienate those on the page that choose to show support in different ways (or already donate anyway, or live overseas and support an animal charity where they are). But it's really heartening to think that many people would like to be asked for money every so often, and on an informal space like a social network, too.

One supporter even commented that doing it this way was 'more personal' than a standing order, which is definitely something to think about. The fact that it was easy as pie through PayPal probably didn't hurt either.

Although we left encouraging thank you messages and thanked as many people as possible individually, we're planning a special 'thank you' message for the page, and we're hoping to get some video or pictures we can add soon, showing what we do and why their donations are important to us.

Such a generous response to a spontaneous ask was amazingly good, and we're so humbled by the people who not only donated but kept this going, posting encouraging comments on ours and their own 'walls'.

If we were dogs, our tails would be wagging like crazy right now. As it is, what they've raised will set quite a few dog tails wagging!
Posted by Dogs Trust at 14:29