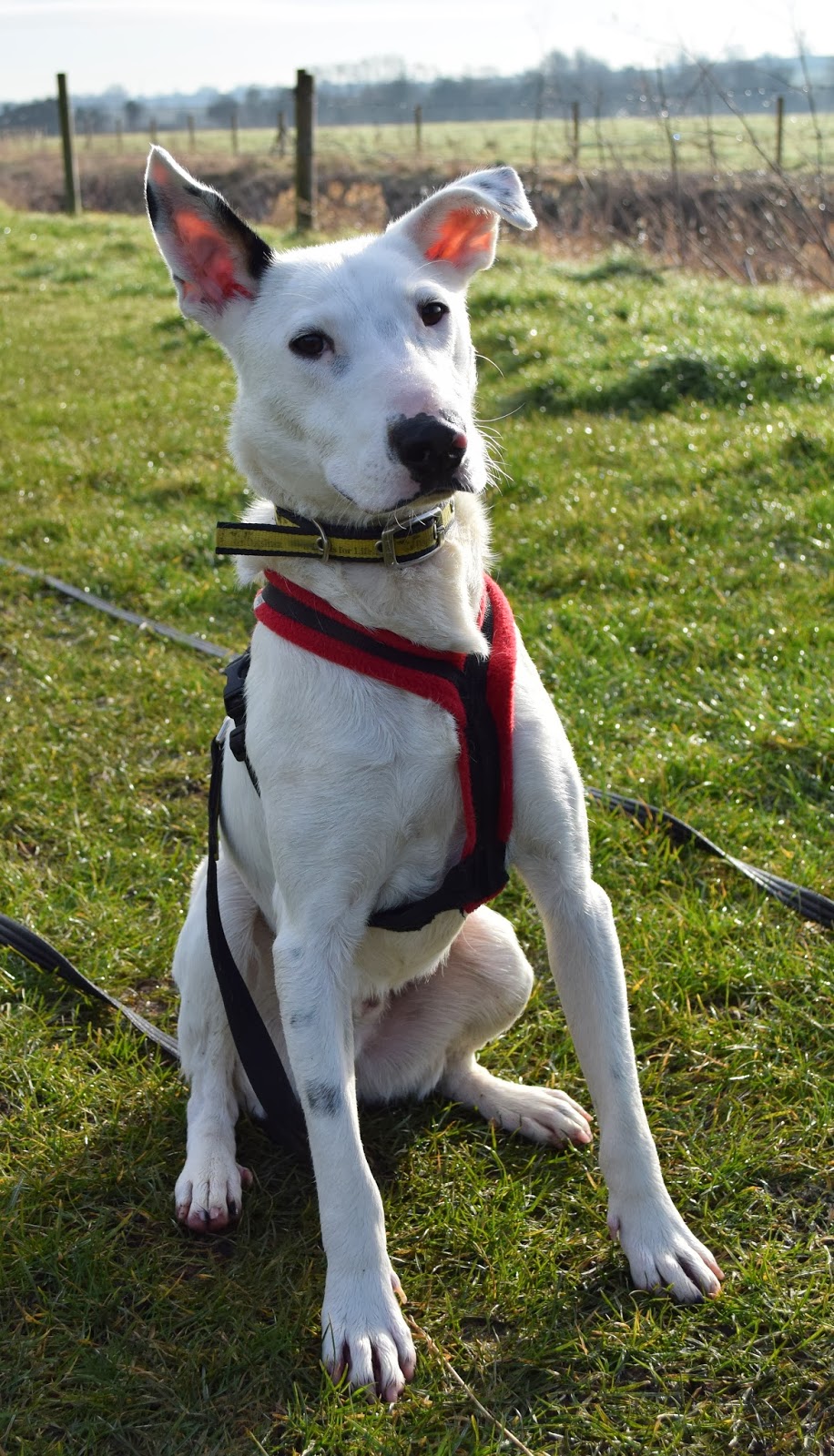 Tootle looks rather like my dog Mork, so when he arrived I had an instant soft spot for him.  Weeks later he’s still with us and no one can understand why.  Look at him; he’s so handsome so I thought I’d make it my mission to find him a home.  Every day this week I’ve been working with Tootle and below is my diary of our time together.


Last week I’d spend some time with Tootle, introducing myself so today when I approached his kennel he knew who I was and seemed pleased to see me.  Today we headed out to Prestwold for a walk around the estate.


Tootle loves getting out and about and is a great traveller, he jumps straight in the van.


I’m using a clicker with Tootle and although he’s only the second dog I’ve ever clicker trained I’d describe it as having magical powers!  Tootle picked it up straight away and responded well soon learning that after every click a tasty treat followed.


It's also important with any dog to not only go out for walks but to have fun and train them while you’re out and about.  A few simple techniques can make all the difference.


With Tootle I’ve begun with rewarding him for checking in with me.  Basically every time he turns to look at me, I click and reward him.  It encourages the dog to stay focused on their handler for which they get a lovely treat!


I walk Toots on a 30ft long line which is a must when teaching recall.  As he reaches the end of the lead, I say “Tootle come” then click and reward as he returns to me.  If he doesn’t respond, I’ll try again before turning and walking in the opposite direction which encourages him to catch up with me.


Our lovely hour long walk in the sun ended with a nice play session with a lovely Springer Spaniel.  Tootle loves dogs and would play all day if he could.  Back at the van we have a little fuss before Toots jumped in and back to the centre we went.


Today we headed to Hoby and pottered along the footpaths beside the river.  It was a lovely sunny day and Tootle enjoyed a good roll around in the grass!


Tootle has already learnt sit, paw and down so every now and again we’d stop and practice these skills.  He also knows to find the treat as I throw one to the ground and say “find it”.  We practiced this quite a lot as it can be a great way to get dogs to focus while they pass things that they may find unnerving or over exciting.


Later in the day Tootle and I had a cuddle in our real life house.  Its important to teach dogs to chill out and relax, sleep is very important to ensure they can keep learning. 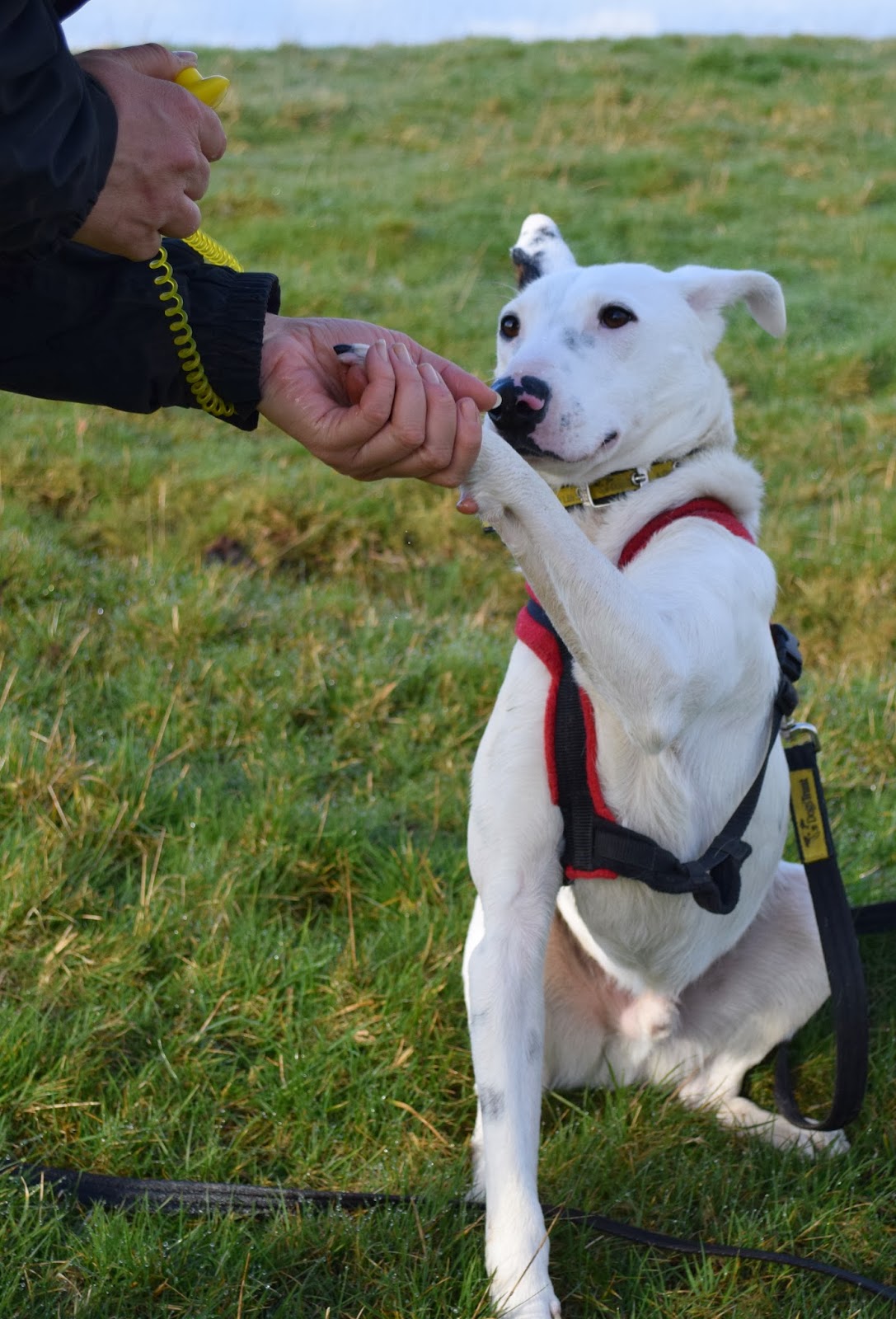 
Today I introduced a sit whenever I stopped walking.  This is an important skill for dogs to master which allows owners to stop and chat to other dog owners without being pulled over or for fear of losing their dog!  Tootle mastered this fairly quickly, returning and sitting neatly in front of me when I asked.  I thought I’d try it without a command, using a hand signal instead (closed hand to my chest).  He took a bit longer to master this but did eventually grasp what he needed to do.


We had a lovely long walk in meeting and greeting a number of dogs.  Many commented on what a lovely dog Tootle is and how surprised that he hadn’t already found a home.


By now our time together is having a significant impact on Tootle.  He is much calmer is his kennel, has begun walking nicely on his long line and now meets and greets dogs in a calm and friendly manner.  We’re having so much fun together! 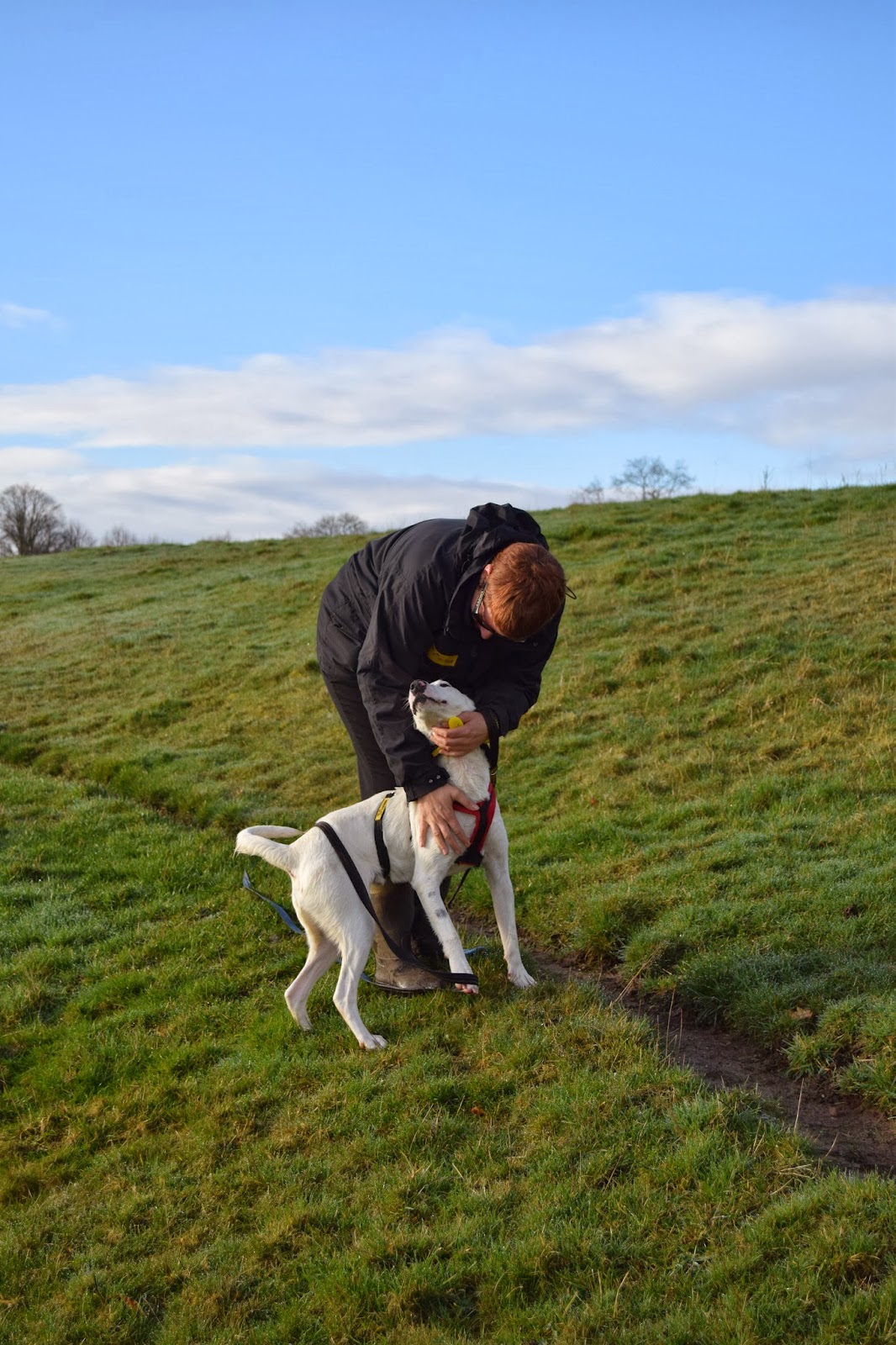 
I decided to do something a bit different today and get Tootle meeting and playing with some of our other centre dogs before going our for an afternoon walk.  Tootle loves other dogs and is always desperate to say hello to as many as he can.  He’s desperate to find a really great canine buddy that he can play with non-stop.


GSD Tommy is similar to Tootle in that he loves to play so they were very well suited and Tootle loved him.  A great game of rough and tumble followed and occasionally Darcy and Patch joined in.


Play time makes a huge difference to Tootle and you can see how happy it makes him.


We went for an afternoon stroll to Hoby again and instantly Tootle began to “check in” before sitting before me whenever I stopped walking.  A polite hello was had with a handsome Setter before I started teaching him “touch”.  Using the clicker I placed a flat hand near to Tootle’s face, when he touched my hand with his nose I would click and reward.  Throughout the walk I repeated this and was pleasantly surprised to see him master it within a matter of 30 minutes.  He’s such a clever boy! 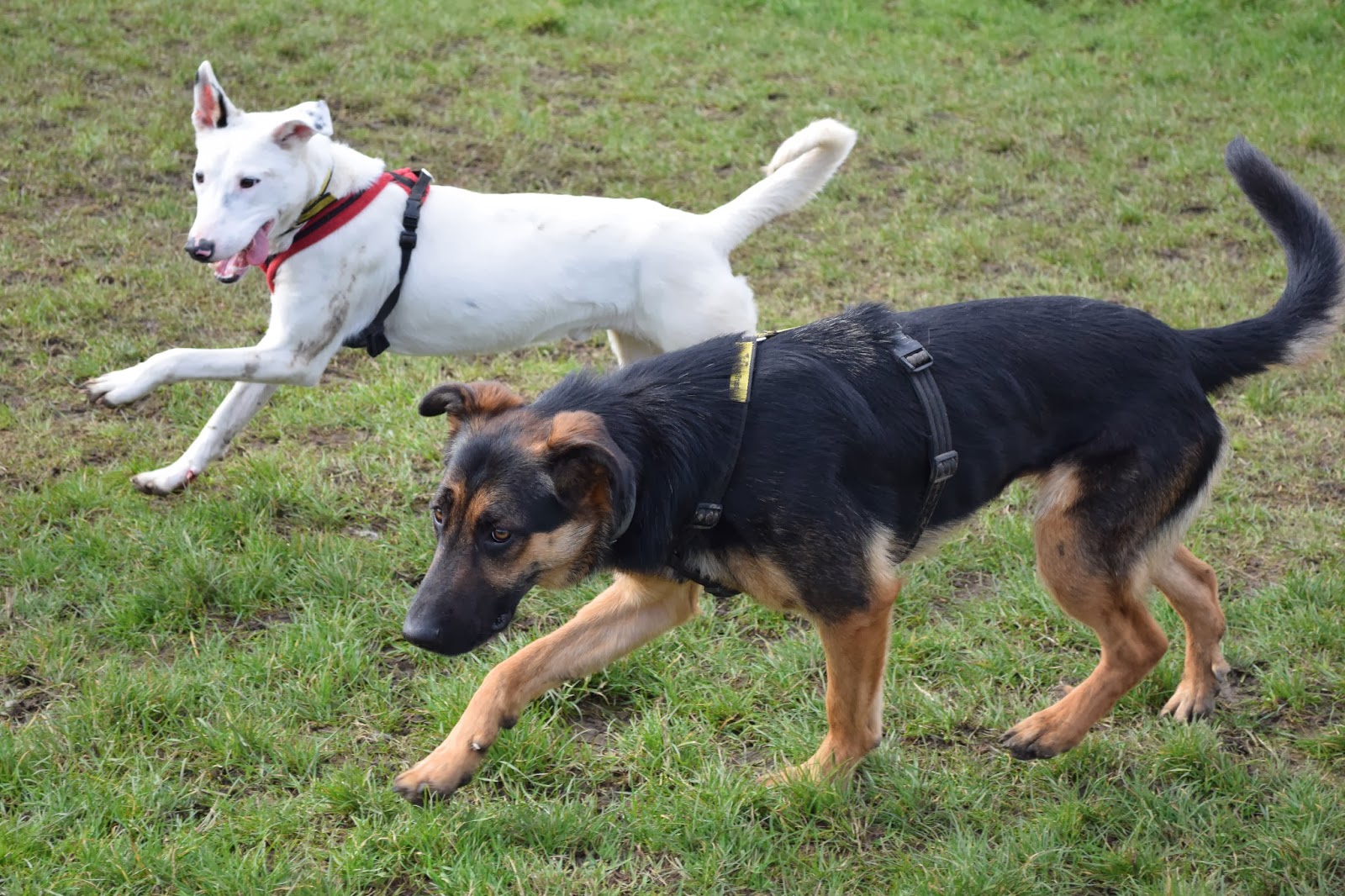 This morning we headed out in the rain to .  Tootle jumped straight out the van ready to go off and explore.  He’s now so much more relaxed, walking really nicely on his long line.

The park was fairly quiet but we met a handsome white GSD called Sonny, a little JRT and his pal a playful 6 month old cross called Stella.  Tootle thought Stella was brilliant and together they had a few games of chase.  Tootle started the week quite boisterous with other dogs, desperate to get them to play with him but as the week has progressed and he’s met more and more dogs, he’s shown lovely calm and friendly behaviours.  It makes me so happy and I know our time has been really worthwhile.

Tootle is a truly lovely dog.  He is eager to please, very clever and extremely sweet natured.  He is only young and will need time to adjust to living in a home and his new life yet I know he’ll bring so much love and laughter to your life as he’s brought me so much joy this week.  I do hope someone will look at his photos and read about our week and fall in love with him.  He is amazing and I’ve loved spending time with him and I’ll continue to do so until that person comes along.